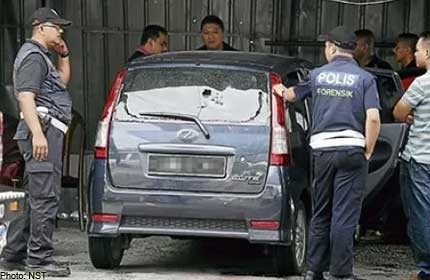 Police forensics team inspecting the car that was used by the three suspects to evade police arrest in Taman Sentosa, Klang, yesterday.

State deputy police chief Datuk A. Thaiveegan said police received a tip-off that three men in a Perodua Viva were acting suspiciously in front of a restaurant at Taman Subang Perdana, here, about 2.30am.

A police patrol car approached the vehicle and instructed the men to step out of the car.

The suspects evaded inspection by reversing it, narrowly missing one of the policemen.

"The car might have hit the police officer if he had not been quick enough to get out of the way," said Thaiveegan at the state police headquarters yesterday.

The police gave chase until the Guthrie Corridor Expressway, where the suspects opened fire at the police but missed.

Thaiveegan said several other police multi-purpose vehicles from here, Sungai Buloh and Klang were also called in to assist in capturing the suspects.

The suspects fired two more shots at the police in Section 20, here, before they headed towards Padang Jawa and Taman Sentosa, Klang.

The suspects' car then hit another car before crashing into a road divider.

The suspects tried to escape on foot but police apprehended one of the suspects, a 27-year-old, at Jalan Dato Dagang 19, Taman Sentosa.

Police later found the second 26-year-old suspect hiding in a drain. He had with him a Smith and Wesson pistol.

The third suspect, also 26, ran into an oil palm plantation, but was later captured by police at 9.15am.

Police have identified the three suspects as members of Gang 08.

The second suspect had four criminal records: two for robbery and two for having drugs.

Thaiveegan said the pistol was believed to have been robbed from a 60-year-old businessman during an incident in Klang last Tuesday.

The case is being investigated for attempted murder and unlawful possession of firearms.