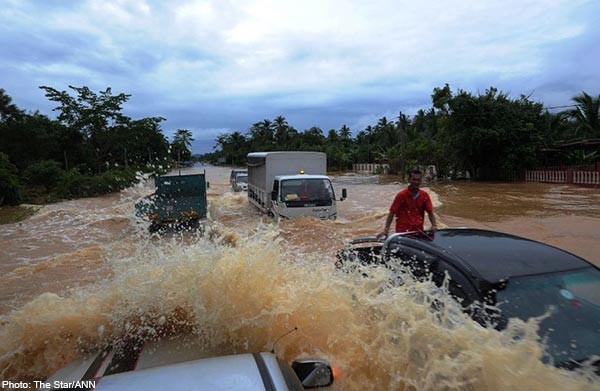 KUALA LUMPUR - Keretapi Tanah Melayu Bhd (KTMB) has stopped its rail service to the east coast as its coaches are submerged in the floods that had hit the region.

Three hundred bridge tracks, 10 train stations and 19 coaches are affected by the floods, either submerged entirely or partially by waters up to 3m high, according to the rail company.

"This is the worst flood the company has seen since 1969," said KTMB chairman Datuk Nawawi Ahmad.

"We are sad to say we have stopped our east coast operations since Monday and the situation is expected to last till the end of next month," he told a press conference here yesterday.

Eight intercity and express trains have been cancelled from the Chegar Perah station in Pahang to Tumpat in Kelantan.

With 800 staff members of KTMB affected, Nawawi said the company wanted to send food and basic necessities to them but, without a single landing pad for helicopters, they can only airdrop the items.

"In the east coast, train services are an important form of transportation for the people, especially when roads can't be used.

"Train stations used to be shelters for flood victims, too, but this time, we are heavily affected as well," said Nawawi, who estimated losses of about "a few million ringgit" for the company.

"We have to see where the waters recede. There is a possibility of more train losses in this disaster," he added.

KTMB sent out a team of volunteers to bring aid to the victims yesterday and a flood operation centre has been set up to monitor train operations and other flood-related matters.