33,000 litres of RON95 fuel go up in smoke after accident on Malaysian highway

The oil tanker burst into flames after a crash on the Miri-Bintulu Coastal Highway in northern Sarawak.

MIRI - Some 33,000 litres of fuel went up in smoke when an oil tanker burst into flames after a crash on the Miri-Bintulu Coastal Highway in northern Sarawak.

The driver had lost control of the tanker, causing it to land on its side before going up in flames.

Firefighters were immediately deployed from the Fire and Rescue Department in Miri to the scene.

Miri Fire and Rescue chief Supt Law Poh Kiong said it had received a distress call at about 8.30am yesterday. 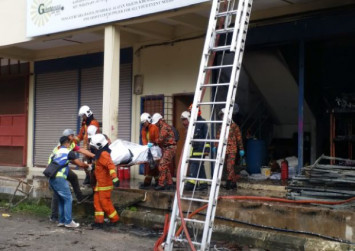 "Our teams managed to contain the fire," he said.

The driver was sent to Miri Hospital for treatment.