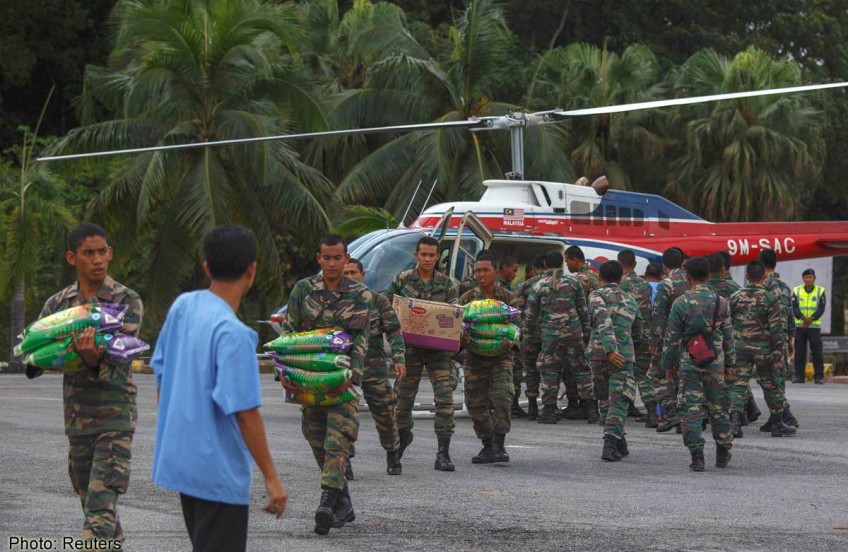 The accident happened late Wednesday in the badly hit Tanah Merah district in Kelantan state near the Thai border as the helicopter was trying to deliver food packages to victims of the deluge, Kelantan police chief Mazlan Lazim told AFP.

The injured helicopter crew were hospitalised following the accident, but one had already been discharged, he said.

"Despite the incident, we are continuing to ferry aid via air because some roads are damaged," Mazlan added.

At least 21 people have died in the worst flooding in decades and more than 167,000 people have been forced to abandon their homes. Roads have been washed away and bridges damaged, hampering the delivery of aid.

The region is regularly hit by flooding during the annual monsoon, between November and March, but this year's storms have been unusually powerful and Kelantan, Terengganu and Pahang states have been particularly hard hit.

Floodwaters have started to subside in many areas but authorities are bracing for possible disease outbreaks.

"We anticipate that flood victims will come in masses seeking care once the floodwaters start to recede," Noor Hisham Abdullah, health ministry director-general, said in a Facebook posting.

The government has been criticised for its slow response after many victims were caught stranded in outlying areas without food and clean water.

[[nid:163930]]
SUBSCRIBE TO OUR NEWSLETTER
Your daily good stuff - AsiaOne stories delivered straight to your inbox