The body of the first of four Myanmar workers have been located by Fire and Rescue Department personnel.

A department spokesman said the incident took place at about 9.21pm near the Lost Paradise Resort along Jalan Batu Feringghi.

The four Myanmar workers were believed to have been caught underneath, based on eyewitness accounts.

"The landslide occurred during drainage digging work. We are checking the site to find the exact spot where the four were buried. Rescue work is under way," the official said. 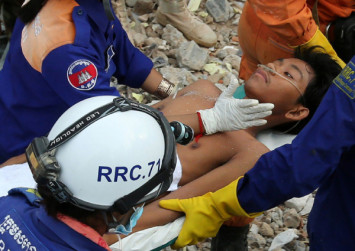 State Works Committee chairman Zairil Khir Johari, who was at the site, said rescue personnel were trying to remove the body of the victim.

He said according to the owner of the hotel, the four had been hired to construct a wall which collapsed.

The rescue work caused a standstill along Jalan Batu Feringghi.

On October 19 last year, nine foreign workers were killed and four other foreigners injured in a landslide at the Bukit Kukus paired roads project site.