4-year-old girl found begging on the streets of KL, police on the hunt for father

Police are now on the hunt for the man who is believed to be a physically abusive father to a four-year-old girl, who was found begging on the streets of Kuala Lumpur.

The man allegedly forced her to beg on the streets, and the tale of this homeless girl has been circulating on social media for quite some time now.

According to a Rakyat Post report, an officer from the Malaysian welfare department shared on Facebook her encounter with the little girl and a man, who claimed to be her father. Here's what the officer suspected after interacting with the young girl.

The girl was found in the streets of Chow Kit in Kuala Lumpur, where she was begging with her grandma. When the young girl saw the welfare officer, she reportedly ran towards her and appeared to be frightened and was crying.

The officer mentioned that the girl's eyes looked bruised and swollen, besides her dishevelled and unkempt look. A man was also found near her, whom the officer believed was the girl's father.

She further claimed that the father is widowed and a drug addict.

Police arrived at the spot and questioned the girl's grandmother and her father. While all this was going on, she clung to the officer and hugged her tightly. She further expressed her desire to not go with her father.

Allegedly demanded RM6,000 in exchange for the girl

The latter then reportedly demanded the welfare officer to give him RM6,000 (S$1,940) in return for the child. In response to this, the officer informed the father that the cops had asked her to take care of the child for the time being.

On hearing this, the father immediately dragged the little girl away and started to scold her and this frightened her even more.

The welfare officer mentioned that the 4-year-old "was forced to go with him," even though it was against her will.

Sensing trouble, the father was quick to flee from the scene, along with the child.

According to a report, police from the Bukit Aman Sexual, Women and Child Investigations Division received a report on the matter on Sept 4. The report was made by the Welfare Department officer, "who received tip from the public." 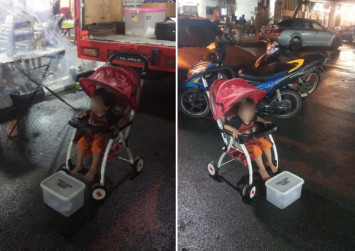 Along with the police, the welfare department is also probing the case as it is illegal to allow a child to beg on the streets, or at any premises, under one's custody. The Malaysian police are actively looking out for the girl and her father.

This heartbreaking story came to the light only after the welfare officer reportedly decided to speak up and raise her voice against the issue. If you know anyone who is a victim of child abuse or is suffering abuse silently, speak up and report the crime immediately.

If you need help, there are many helpline numbers in Singapore that can come to your rescue.

Stay safe, stay alert and raise your voice when needed.