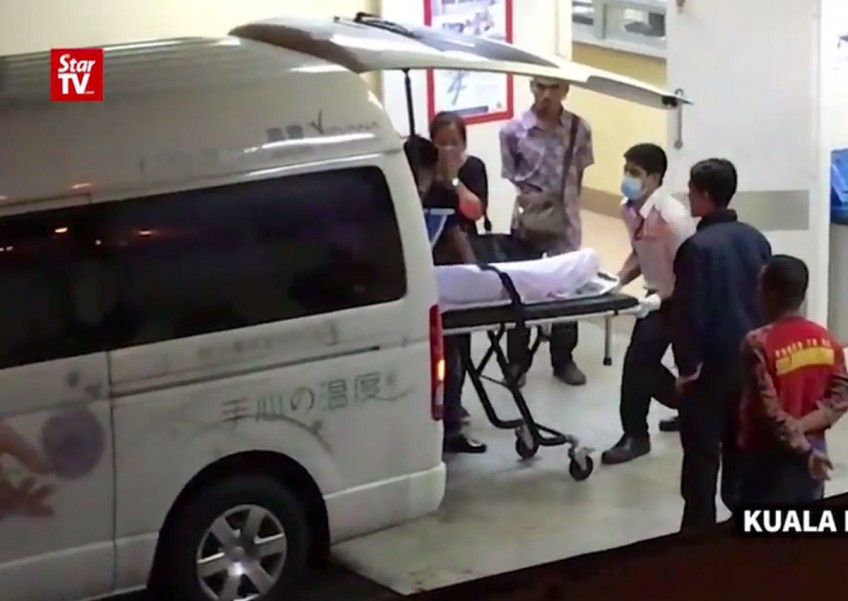 Such was the heart-wrenching cries of a relative of the six people who were killed in a tragic accident on their way to Bidor, Perak, said to be for Qing Ming.

The six died after their MPV was crushed by a trailer along the North-South Expressway near the Tg Malim toll plaza. The trailer was driven by a man with a record for drug and eight road offences.

It is learnt that the six victims were from three generations in a family - Lam Wai Loon, 46, who was driving, his wife Wong Check Lee, 53, and their two sons Jie Yang, 19, and Jie Hong, 13, together with Wai Loon's father Leong Choy, 76, and brother Wai Keat, 35.

Distraught relatives and friends were seen at the mortuary of the Kuala Kubu Baru Hospital, where the bodies of the victims were sent.

An elderly woman, believed to be Wai Loon's mother, wailed after arriving at the mortuary at about 4.30pm yesterday, repeating the distressing phrase in Cantonese.

Journalists were not allowed into the mortuary while family members declined to be interviewed.

Earlier at about 2.50pm, an unidentified male relative was seen entering the mortuary accompanied by police.

It is learnt that he was supposed to meet the six victims at Bidor, but they did not show up.

He tried calling them to no avail, and was informed by another relative that they were involved in an accident.

The bodies of the deceased were later taken to Nirvana Memorial Centre at Sungai Besi for a bereavement service.

According to the Selangor Fire and Rescue Department assistant director (operations) Mohd Sani Harul, it is believed that one of trailer's tyres burst, sending the vehicle careening into the family's car that was travelling in the same direction.

"It took us over an hour just to get the bodies out of the wreckage.

"We had to use special tools and a crane to retrieve the remains," he said.

Hulu Selangor OCPD Supt R. Su­­pra­­maniam said the trailer driver, who was not injured, has been detained under Section 41(1) of the Road Transport Act for reckless driving resulting in death.

While the driver's urine test came back negative, the police found out that he has a criminal record for drug offences.

Supt Supramaniam revealed that the driver was previously involved in two road accidents in the Kampar and Kuala Pilah area, and that six summonses have been issued to him for offences including driving without a licence and driving an uninsured vehicle.

Read also: 6 unusual items people burn to send their loved ones in the afterlife