SIBU - An octogenarian has been arrested for allegedly molesting his teenage Indonesian maid, who accidentally impaled her leg on a spiked gate during her attempt to escape.

The 18-year-old victim had been working for the suspect since Aug 3 at a house on Jalan Awang Ramli Amit here.

Sibu OCPD Asst Comm Stanley Jonathan Ringgit on Wednesday (Aug 22) said the suspect, an 81-year old man, was arrested 13 hours after the maid was admitted to hospital for an injury to her left calf.

The victim said she tried to run away at 10.30pm on Tuesday (Aug 21) and claimed that the suspect had molested her twice before.

ACP Stanley said in the first incident, the victim was watering plants in the garden when the suspect asked her to come indoors.

“When she was inside a room (with him), he locked the door, groped and kissed her and also touched her breasts,” he said.

On 3.30pm on the same day, the suspect grabbed her by her hand and asked her to go into his room. She refused and ran out of the house.

Later that night, he said, the maid tried to escape by climbing over the house gate. 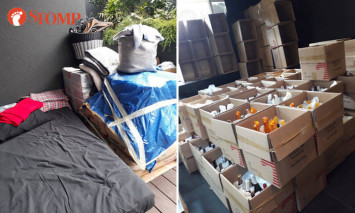 In her haste to escape, she accidentally impaled her left calf on one of the spikes on the gate.

A passer-by saw the maid in distress and immediately called the police.

Firemen had to be called in to cut the spike off the gate before she could be sent to the hospital for treatment.

She was rushed to the hospital with the spike still embedded in her calf.

ACP Stanley said the man is being investigated under Section 354 of the Penal Code for assault or use of criminal force with intent to outrage the victim’s modesty.