The second incident occurred on Tuesday in Taman Bukit Teratai when Mohamad Danish Supri Antony was playing with some friends at about 6.22pm.

Ampang Jaya OCPD Asst Comm Noor Azmi Yusoff said the boy was believed to have fallen into a drain and been swept away by strong currents as it was raining.

"His mother called the Mers 999 hotline. A Search and Rescue (SAR) operation consisting of various agencies, including the police and Fire and Rescue Department, has been launched but as at 2.30pm yesterday we have not found the victim," he said at a press conference. 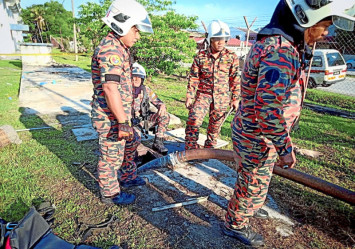 ACP Noor Azmi said the focus of the operation was at nearby Sungai Kerayong, as well as rubbish traps in the surrounding area.

"We have also informed the Klang police to keep a lookout as in the past when such an incident occurred in Ampang Jaya, the body had turned up in Sungai Klang three days later, " he said.

In the Ipoh incident, Anas Hadif Ahmad Hafiz had fallen into the manhole when he was playing with his two older brothers.

Police said the manhole was thought to have been opened a day earlier by children playing at the site.