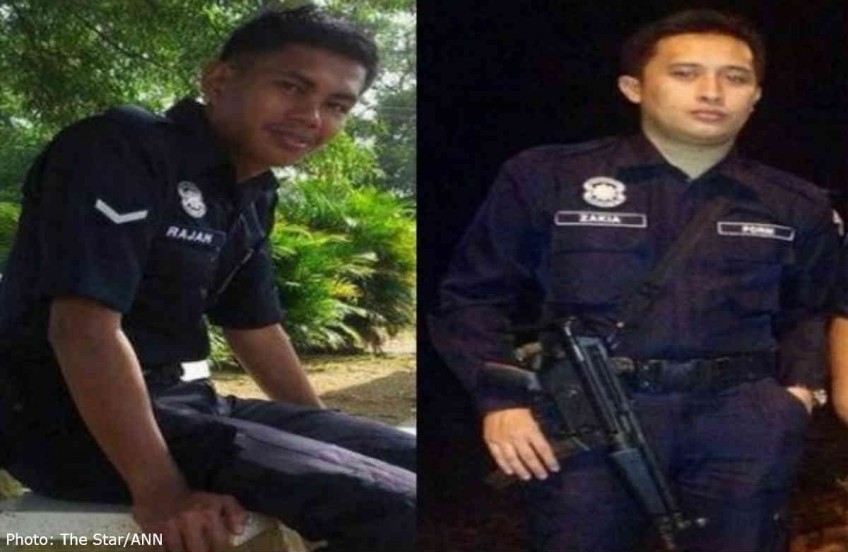 The marine policeman who was taken hostage by the Filipino gunmen called his wife on Sunday night to say he was alive.

Inspector-General of Police Tan Sri Khalid Abu Bakar told the Star yesterday: "He called his wife last night saying that he is okay except that he is with some people."

His widow, Madam Salamah Ahmad, earlier told Malaysian newspaper The Star that she received a text message from him at 11.02pm on Saturday.

As she and their son Khairin Zafran, who will turn one on July 26, were sleeping, the 26-year-old housewife did not think anything of it since he often sent text messages to her while on duty.

Around midnight, a cousin called to tell her the bad news. "I was in shock. In about an hour, the news came that he was killed. I just couldn't believe it," she told reporters.

Madam Salamah said her husband of seven years was looking forward to celebrating his son's first birthday and had bought the family's Hari Raya clothes.

"The new clothes are all in blue. He wanted a blue theme for the family," she said, adding that the birth of their son was very special to him as she had suffered two miscarriages.

"They could have acted so because our military commandos and police succeeded in penetrating their stronghold to save a kidnapped Chinese national recently," he said on Sunday.

"But we will not yield to such attacks and will fight back to ensure the security of the region."

Defence Minister Datuk Seri Hishammuddin Tun Hussein, who is in Lebanon, tweeted that the armed forces would work closely with the police to maintain security in the east coast of Sabah.

Although top police and military brass are looking at it as a possible revenge attack, some security officials believe the strike could also be associated with disgruntled groups hit by the crackdown on water villages on the east coast.

They are also trying to determine the group responsible for the audacious commando-style stealth attack and whether they were from the Abu Sayyaf group, a breakaway Moro faction, or the so-called Sulu Sultanate's royal army.

Unlike previous raids carried out by kidnap-for-ransom bandits based in neighbouring Tawi Tawi islands, the latest group came with intent to kill.

They arrived with guns blazing at the Mabul Water Bungalows Resort restaurant and office.

According to some security officials, it was quite clear that they intended to hit the security outposts though they could have also taken tourists as hostages if they had happened to see any.

Some officials felt that if it was revenge, the group would have attacked bases closer to the sea borders of Sabah and Tawi Tawi instead of coming close to shore for a risky operation at a time when security forces were on alert after a kidnap attempt at a fish farm near Kampung Bongau Bongau.