PETALING JAYA - The appointment of Tun Dr Mahathir Mohamad as the chairman of Pakatan Harapan or the "top dog" of the Opposition coalition is the biggest betrayal of the reformasi movement, said social activist Kua Kia Soong (pic).

He said it was bad enough when Pakatan Harapan made an alliance with the "unrepentant former autocrat" but also must answer for all his previous scandals.

"Harapan must be prepared for more than the RM30 billion (S$9.6 billion) forex (foreign exchange) losses incurred during Dr Mahathir's term," said the Suaram adviser in a statement yesterday.

Referring himself as "top dog" by virtue of being Pakatan Harapan chairman, Dr Mahathir had also challenged Prime Minister Datuk Seri Najib Tun Razak to a debate, adding that doing so could clear their names. 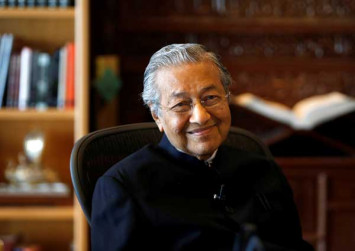 The proposed Nothing To Hide 2.0 debate is slated to be held on Aug 13 in Shah Alam.

The reformasi movement was born following Dr Mahathir's sacking of Anwar as deputy prime minister in 1998.

"The Indian plantation workers whose communities were destroyed through Dr Mahathir's neo-liberal capitalist policies and who were forced to become urban settlers.

"The needless communal controversies created around mother tongue education during the 80s, including the Unified Examination Certificate in 1975, the National Culture Policy, the unqualified school administrators sent to Chinese schools in 1987, and others," he added.

Kua also noted that in more recent times, Dr Mahathir had criticised Najib for wasting public funds on the Chinese after they voted for the Opposition.

"He is also the top dog in the new Parti Pribumi Bersatu Malaysia, which is only open to 'pribumis' no less.

"You have to be a 'zombie democrat' to accept such a party into the coalition that is supposed to embody the reformasi movement.

"Do Harapan leaders still remember what their reformasi programme stands for?" he asked.