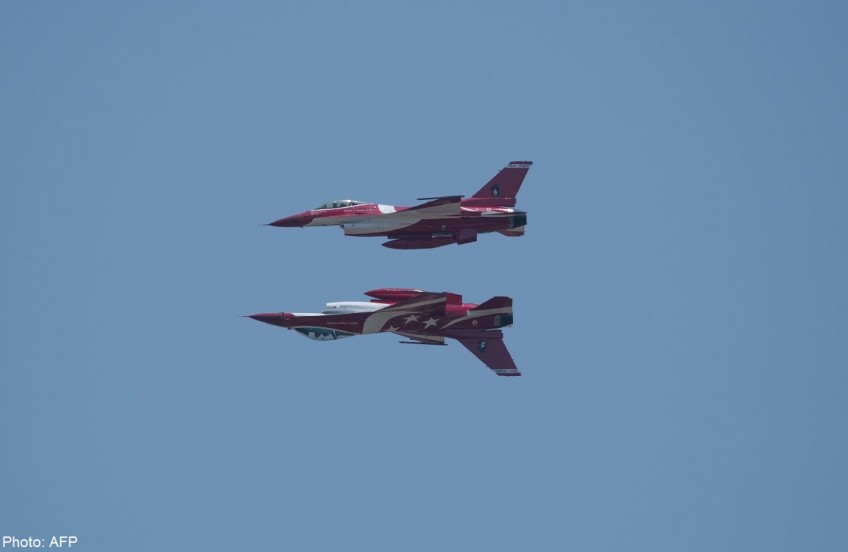 The Republic of Singapore Airforce aerobatic team Black Knights fly in formation during the Langkawi International Maritime and Aerospace Exhibition 2015 (LIMA’15) in Malaysia's resort island of Langkawi on March 18, 2015.

Despite the scorching sun, the crowd, equipped with cameras and binoculars, stood at the Mahsuri International Exhibition Centre (MIEC) and by the roadsides to take shots of the amazing sky acts.

The crowd paid particular attention when the Malaysian Krisakti aerobatic team and the China's August 1st all-female pilots took to the sky with breathtaking moves.

This is the third year the five-member Krisakti team is performing in LIMA, while it was the first time here for China's People's Liberation Army (PLA), with their Chengdu J-10 fighter jets. Yu Xu, Tao Jiali, He Xiaoli and Sheng Yifei, all 28, had promised that they would give a memorable show.

There were also more than 100 aircrafts on display at MIEC. The crowd was given the rare opportunity to go inside some of the planes to snap shots in the pilot seat. Since 8am, visitors have started queuing up to enter MIEC

Among the visitors were housewife S. Devi, her husband and three daughters aged 11, 12, and 13 who came all the way from Klang. They touched down at Langkawi International Airpoirt at 1pm and quickly rushed to MIEC to catch the aerial show.

LIMA also attracted Yana Pelenichenko, 26, a company manager from Kazakhstan. "I have been to Malaysia for a few times but this is my first time at LIMA.

"It feels great seeing so many aeroplanes on display and stunning aerobatic shows. It is a good experience for children and this can inspire them to become pilots in the future," said Pelenichenko..

Passers-by were also attracted to siblings Mohd Nabil Ikhwan, 10, and Mohd Nafiz Irfan, six, who came dressed in cute airforce suits. Many wanted to take photos with the siblings.

Their father Shahrul Nizar Zakaria, 37, said they came from Kedah. "This is not their first visit. They want to become pilots.

The LIMA exhibition was only opened to the public yesterday, the fourth day.

Tickets are priced at RM10 for adults while children below 16 years old enter for free.

Maritime demonstrations and naval ships display are being held at the Resorts World Langkawi in Awana Porto Malai, where the public are given the opportunity to go on board some of the naval ships.