All eyes on new Umno chief

PETALING JAYA - All eyes are on Umno today as it holds its first supreme council meeting under a new leadership team tasked with reviving the crisis-hit opposition party.

At his side will be Datuk Seri Ismail Sabri Yaakob, who will carry out the duties of the deputy president.

The party's management committee announced the duo's appointment yesterday after president Datuk Seri Dr Ahmad Zahid Hamidi delegated the duties of the president to his deputy Mohamad on Tuesday.

Since the May 9 general election, 17 MPs from Umno have quit the party as calls grew for Ahmad Zahid to step down.

A party source said the 3pm meeting at the Umno headquarters in Kuala Lumpur would endorse the appointments of Mohamad and Ismail Sabri, who is the most senior of the party's three vice-presidents.

The meeting will also discuss and decide on Ahmad Zahid's intention to go on leave.

"After that, the council will listen to Mohamad's instructions on what Umno needs to do and on the reforms needed," said the source.

Mohamad declined to comment when contacted, while Ismail Sabri said the acting president was expected to outline his plans for the party at a media conference after the meeting.

"He will chair the meeting and I will be by his side, but he is the driver, so we leave it to him to take the lead," said Ismail Sabri.

Umno officials said they were hopeful that the party could recover with the new team in place.

"To be relevant, Umno must be seen as a progressive conservative party with strong Malay bumiputra Muslim support base while making earnest efforts to be inclusive by reaching out and engaging other races.

"Not an easy task, but certainly not insurmountable either," said Abdul Rahman.

He said Umno must offer economic policies that would address rising worries over the cost of living, jobs and other bread-and-butter issues.

Party secretary-general Tan Sri Annuar Musa, who announced the appointments yesterday, said Moha­mad would serve as acting president for as long as Ahmad Zahid was on leave although he did not elaborate how long that would be. 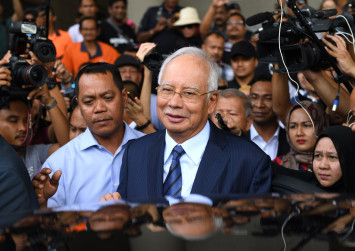 "We hope that the leaders will make full use of the trust given to them to bring a resurgence in Umno so that we can regain power in the next general election," said Wanita Umno chief Datuk Noraini Ahmad.

Umno won 54 Parliament seats in the last general election, and the departures of the 17 MPs have left the party with 37 in the 222-seat Dewan Rakyat.

"There is talk of another wave of Umno elected representatives jump­ing ship, so this new team of leaders need to prevent it," said Sivamurugan, adding that Moha­mad would also need to keep warring factions in Umno from widening the rift in the party.