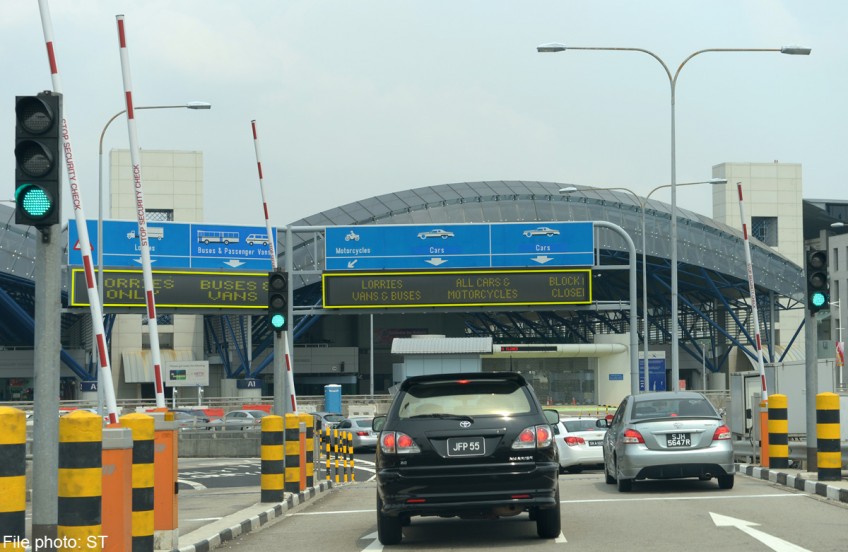 Vehicles on the Causeway waiting to enter Singapore. The original idea behind the foreign vehicle permit fees was that motorists using foreign-registered vehicles should bear the same costs as motorists in Singapore.

Prime Minister Datuk Seri Najib Tun Razak said the decision was made following a request made by the state.

"I have discussed the implementation with Deputy Prime Minister Tan Sri Muhyiddin Yassin and have informed Minister in the Prime Mi­­nister's Department Datuk Seri Wa­­hid Omar pertaining to our decision.

"I have instructed him (Wahid) to inform the Road Transport Depart­ment (JPJ) to discuss on when it can be implemented and to allow them space to work out the details," he said during a buka puasa event orga­nised by the state after launching a free City Bus service initiated by the Johor Baru Municipal Council (MBJB).

Najib said the details over the VEP fee and its implementation date would be released later, adding that a portion would be channelled to the state government.

Deputy Transport Minister Da­­tuk Aziz Kaprawi, who was also present, said the state government proposed a fee of RM20 for Singa­pore-registered vehicles entering the state via the Causeway and the Second Link.

Aziz also said the VEP would only be implemented on the country's southern border and would only in­­volve Singapore-registered vehicles.

The issue of imposing a levy for foreign-registered vehicles entering Johor has been raised various times in the past but the idea was scrapped following views it could deter Sin­­­gaporeans from visiting Malaysia.

However, the state government has been pressing for the VEP to be implemented especially after Singapore recently announced that it would raise its VEP fee for fo­reign-registered cars from S$20 (RM52) to S$35 (RM90), beginning August.

The republic also announced that the fee for foreign-registered goods vehicles would also be raised from S$10 (RM26) to S$40 (RM103).

In Kuala Lumpur, the Transport Ministry will present a paper to the Cabinet on the proposed fee to be imposed on Singapore-registered vehicles.

Umno Youth chief Khairy Jamaluddin said this was relayed to him by Datuk Seri Liow Tiong Lai when he voiced the movement's stand on the issue.