All out against errant traders 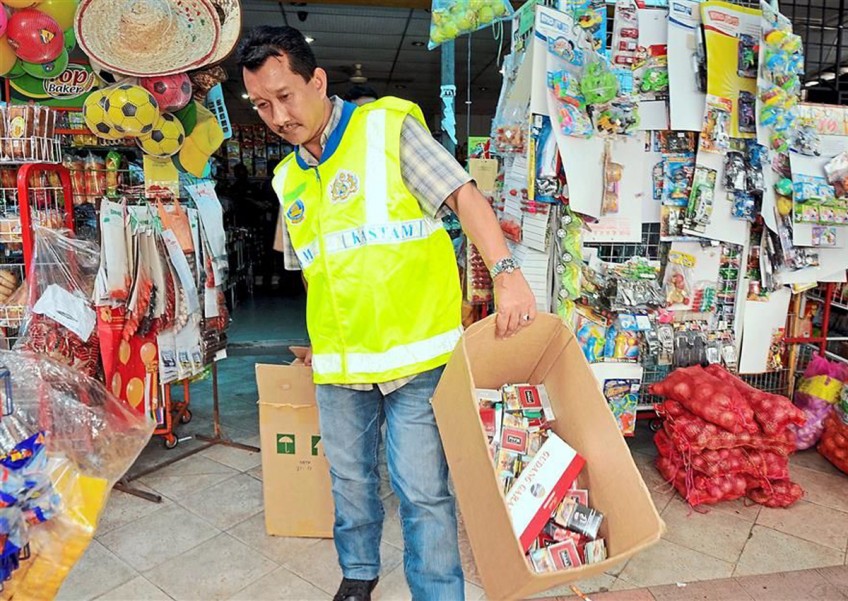 A Customs Department officer taking away the contraband cigarettes seized from a sundry shop at Kampung Dato Sulaiman Menteri, Johor Baru in March.
The Star/ANN

WITH the increase in cigarette price and the uncertainty over the legality of vaping in the country, one thing is for certain - demand for illegal cigarettes will remain high, and continue to grow.

Hardcore smokers who are not going to quit will be tempted to switch to cheaper alternatives.

While law enforcement agencies are ramping up efforts to stop illicit cigarettes from entering the country and reaching the supply and retail chain, there are still gaps which contraband can slip through.

As such, the final frontier are the retail shops, and this is where the law enforcement agencies need to come down hard and strike where it hurts for the retailers and shopowners, by taking away their licences to operate their business.

Towards this end, the Sandakan Municipal Council's Anti-Illicit Goods Campaign is sending a clear warning to retailers involved in the sale of illegal products such as smuggled cigarettes and liquor that their business licence will be revoked.

Council president Datuk James Wong said, errant retailers risked having their shop rental agreements terminated and the illicit goods found in their premises will be seized.

With this campaign, the Sandakan Municipal Council joins several local authorities in the country that are taking the stand to revoke business licences of errant retailers.

This move is welcomed by honest shopowners who want the authorities to come down hard on those who offer contraband items including cigarettes and alcohol.

"That especially goes for the Customs Department as controlled items are under their purview. They must stop the smuggling of these items and not allow it to enter our shores in the first place," he said.

He said both Customs and local councils must perform raids frequently at shops that sell contraband items.

"Customs must find out how these items are smuggled in.

"By simply revoking their licences, the items will still reach other shops so the problem is never solved," he said.

Mithlan added thats the authorities need to seize the items and revoke licenses of shopowners immediately.

"We do not know if the quality of these contraband cigarettes comply to the requirements set by the Government. So why wait?," he said.

Malaysia India Provision Shopowners Association former president and also shopowner P.S. Rajah said authorities must come down hard on shopowners selling such goods as they posed a danger to customers.

"Customers have no idea what goes inside them when consuming these contraband items," he said.

He added that these errant retailers were also taking away profits of legal traders selling cigarettes and alcohol legally.

"If someone holds a licence to sell liquor legally, the poor man not only has to pay a hefty rent but also lose business day by day as a result of stiff competition of people who get away with selling contraband items," he said.

However, Rajah said authorities must also take action against the customers.

"They must come down hard on these people. Slapping them with summonses is a good idea but customers are like addicted to these items.

"So, the Government must make it a point to find solutions to tackle it at the customers' level as well," he said.

The Customs Department said it would do its part and go all out to cut the supply chain of contraband cigarettes in the country, including going after the smugglers.

"There will not be any supply of such cigarettes if certain retailers are not in cahoots with the contraband suppliers.

"Retailers are also culpable if they willingly sell the contraband items," he told StarMetro yesterday.

He vowed that the department would go all out to stop the sale and supply of contraband cigarettes in the country.

"Multipronged strategies including Ops Outlet and Ops Pacak would still be conducted nationwide.

"We will target smugglers and their entry points.

"We need the co-operation of the public, especially the retailers to weed out this despicable act," Khazali said.

Ops Pacak will see personnel at every identified location to thwart the sale, consumption and possession of such cigarettes while Ops Outlet will zero in on retailers selling contraband cigarettes.

Those with information about contraband items can contact the Customs Department at 1800-88-8855.