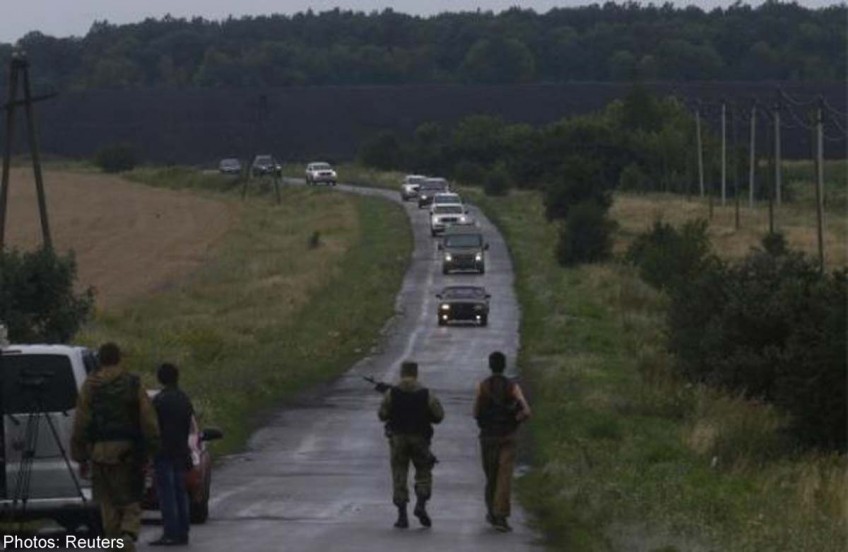 Pro-Russian separatists watch as Organisation for Security and Cooperation in Europe (OSCE) monitors arrive at the crash site of Malaysia Airlines flight MH17, near the settlement of Grabovo in the Donetsk region, July 18, 2014.

Rescue efforts were in disarray as armed gunmen in fatigues and balaclavas refused to allow international monitors full access and the grisly remains of some of the 298 passengers killed have yet to be removed.

Ukraine has warned that the rebels, who Kiev and the US have accused of blowing the plane out of the sky with a missile, were "hours away" from removing key evidence across the Russian border.

As fears grew that evidence was being tampered with world leaders voiced their frustration with Moscow, pushing East-West ties to crisis point after months of discord over the Kremlin's interference in ex-Soviet Ukraine.

US Secretary of State John Kerry told Russian counterpart Sergei Lavrov that Washington was "deeply concerned" investigators were denied "proper access" to the crash site for a second consecutive day.

His spokeswoman Jen Psaki later said the "unacceptable" insecurity at the crash site was an "affront to all those who lost loved ones and to the dignity the victims deserve".

"The United States is also very concerned about reports that the remains of some victims and debris from the site are being tampered with or inappropriately removed from the site," the State Department said.

Kerry was backed by leaders from Britain, the Netherlands, Malaysia, Australia and France - as well as Ukraine - in calling on Russian President Vladimir Putin to intervene in getting an international probe under way.

There was growing concern about the whereabouts of some of the bodies which had been removed from the crash site, while others were left lying in field in the rural part of eastern Ukraine where the Boeing 777 jet was brought to ground.

"If President Putin does not change his approach on Ukraine, then Europe and the West must fundamentally change our approach to Russia," he said, writing in the Sunday Times newspaper.

"Russia can use this moment to find a path out of this festering, dangerous crisis. I hope it will do so. But if that does not happen then we must respond robustly," Dutch Prime Minister Mark Rutte - his nation mourning the loss of 192 compatriots - said he had called on Putin during a "very intense" conversation to "take responsibility" for a credible investigation.

Australian Prime Minister Tony Abbott said the crash site was "absolutely chaotic" as he sought to recover 28 bodies of his compatriots killed in the disaster.

International monitors were met on Saturday by Kalashnikov-wielding militias who allowed them access to only the outskirts of the field - its swaying sunflowers hiding dismembered remains of charred and decomposing bodies of victims whose lives were cut short on Thursday.

The Ukrainian government issued a furious statement declaring that "terrorists with the support of Russia are trying to destroy proof of this international crime".

Malaysia's transport minister expressed alarm before boarding a flight to Kiev over "indications that vital evidence has not been preserved in place".

"One of the crucial questions is the fate of the black boxes," said Organisation for Security and Cooperation in Europe spokesman Michael Bociurkiw.

The head of the self-proclaimed Donetsk People's Republic, into whose airspace the doomed jet strayed to avoid bad weather, said his men had never recovered the data recorders or tampered with evidence.

The diplomatic wrangling was accompanied by uninterrupted fighting across Ukraine's eastern rustbelt - a Russian-speaking region of seven million people who largely view the more nationalistic west of the splintered country with mistrust.

Putin rejects all charges of providing either funding or military support to the insurgents who in April seized towns in the region demanding independence after a pro-Western government took power in Kiev.

Ukrainian troops pressed on with an offensive against the rebels, reporting they had taken full control of the main airport of the neighbouring separatist stronghold of Lugansk and launching all-out offensives against two nearby towns.

Government troops said they had also established full control of Donetsk airport for the first time since it was seized at the end of May.

US President Barack Obama and major world leaders now agree that the Malaysia Airlines jet was blown out of the sky at 33,000 feet (10,000 metres) by a sophisticated surface-to-air missile fired from rebel-controlled territory.

Kiev has gone a step further by accusing militias of using a Russian-supplied Buk system to down the jet after confusing it with a Ukrainian military transporter.

Ukraine has released recordings of what it said was an intercepted call between an insurgent commander and a Russian intelligence officer as they realised they had shot down a passenger jet.

But Putin has blamed the tragedy on Kiev's three-month military operation.

The plane's downing came less than a day after the United States unleashed punishing sanctions against some of Russia's most important energy and military firms - most of them with links to Putin - and urged more hesitant European leaders to follow suit.

The European Union - many of its member states dependent on Russian gas - took the far less punitive step on Friday of curbing some future investments in Russia and leaving the option open for broader sanctions.