Another elephant found dead in Sabah

KOTA KINABALU - A carcass of a Borneo pygmy elephant has been found floating down from the upper reaches of the Kinabatangan river.

The discovery was made early yesterday. It could not be immediately determined if the elephant died of natural causes or was a victim of poachers.

A team of Sabah Wildlife Department rangers has headed to the area to investigate the latest death of Sabah's critically endangered jumbos.

Department director Augustine Tuuga said that an investigation was underway but felt that it could be difficult to pinpoint where the animal had died.

"It was floating from upstream, so it is rather difficult to find where the carcass originated," he said.

"I do not have details yet."

The discovery of the elephant was reported by members of a community-based eco-tourism cooperative in Batu Puteh along the Kinabatangan river.

This is the third elephant death in five weeks. 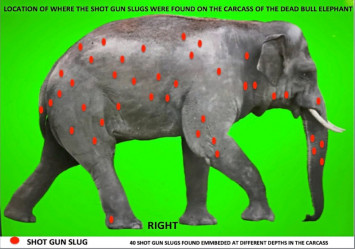 In late September, there was a merciless killing of a bull elephant at a plantation in Tawau's Kalabakan area.

Six people were arrested over the case. They are expected to face charges under the Firearms Act for possession of illegal firearms as well as charges under Sabah's Wildlife Conservation Enactment for killing an endangered jumbo.

There were over 70 bullet wounds on its body.

Last month, an adult bull pygmy was found with its tusks removed.

The decomposing remains were discovered at a plantation Sabah's central Beluran district.

So far, wildlife experts have not been able to pinpoint the cause of death though there are suspicions that it might have been a victim of poachers or poisoning.

Two holes were found on its decomposing body but there were no bullet shells. Its tusks were found later near the body.