Anwar-Azmin feud: Malaysians say they are fed up, tired of endless politicking 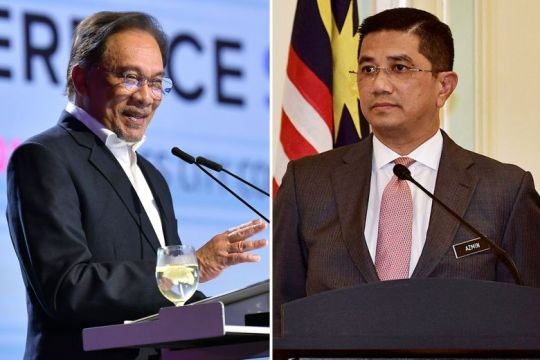 PETALING JAYA - While the apparent rift between Datuk Seri Anwar Ibrahim and Datuk Seri Azmin Ali continues to dominate headlines, many Malaysians are generally fed up with the whole affair.

They have taken to social media to voice their disappointment at the endless politicking between the two Parti Keadilan Rakyat (PKR) leaders and their factions.

On Twitter, Malaysians said it was sad to read what was happening between Mr Anwar and Mr Azmin.

"Two former allies going to war over position and influence is one thing, using this sordid scandal as a battleground is another," tweeted Ariff A Shah. "It's just sad."

Another netizen, Nsyakinah, said the media and political attention should be focused on the development of the nation instead of the sex video.

"Literally no one cares about the video, but politicians keep pouring all their energy into it.

"We just had a constitutional amendment for Undi 18 (Vote 18) but instead every day we have to hear about the sex video," she added.

Parliament earlier this week approved amendments to the Federal Constitution to lower the voting age from 21 to 18, and to allow for automatic voter registration, among others.

Video clips emerged last month depicting two men involved in sexual acts. Former Santubong PKR Youth chief Haziq Abdullah Abdul Aziz has confessed to being one of the men, alleging that the other man is Mr Azmin. Mr Azmin has denied he is the other man in the video, and a police investigation is ongoing.

On Facebook, some Malaysians couldn't help but weigh in on the saga, but others said they were tired of the politicking and called for the fight to end.

"Both of you please make peace, tolong lah (please), for the New Malaysia or we will go back to Barisan Nasional," Muhd Muhd said, referring to the previous government.

Said Robert Chan: "End all this unnecessary bickering at once. No more posts on media."

"Never mind that we just created history by lowering the voting age to 18 and introducing automatic registration. Let's all focus all attention on a royal divorce and sex video," Iskandar Fareez said.

As reports of MPs pledging their support for either Azmin or Anwar surface, Malaysians also asked their lawmakers to focus on serving the people rather than politicking.