The PKR president said he was in possession of the bank statements that show the amount was paid to the website's editor Clare Rewcastle Brown.

"My name is Anwar Ibrahim. If I do not have the facts, I would not fight.

"But I have the facts and the evidence that PAS had to pay RM1.4 million to Clare.

"If anyone wants to dispute this, they are welcome anytime to challenge it in court. I have the evidence.

"I will show the bank statement soon. Which bank? I will reveal later. The amount? RM1.4 million," said Anwar at a ceramah here as part of Pakatan Harapan's Semenyih by-election campaign late Wednesday (Feb 27). 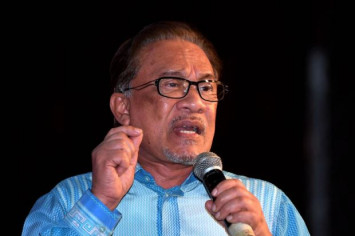 In 2017, Abdul Hadi sued Rewcastle Brown for libel in London over an August 2016 Sarawak Report article alleging that PAS received RM90 million to guarantee its support for Umno and Barisan Nasional.

She filed a counterclaim in October 2017 and on Feb 1 this year, Abdul Hadi opted for an out-of-court settlement.

Anwar also rebutted PAS' claim that the case showed that the party was innocent and did not receive any money.

"When I sued Utusan Malaysia in the past, I withdrew the suit because they apologised to me and paid compensation.

"In this case, Abdul Hadi withdrew the suit and claimed that PAS had won the case.

"If PAS had won, Clare would not repeat her allegation. But she did.

"Clare would have apologised, but she did not. She also did not remove the article," said Anwar.

He did not reveal much more in his speech, and left the venue immediately after he finished speaking.

Anwar's statement came after PAS had earlier denied that neither the party nor Abdul Hadi had paid a sum to settle the case against Rewcastle-Brown.

Its secretary-general Datuk Takiyuddin Hassan said the London High Court consent order stipulates that both Abdul Hadi and Rewcastle-Brown would withdraw their claims and counterclaims, and that no orders were made as to costs.