BEIJING - Datuk Seri Anwar Ibrahim has stood up in defence of China, saying its success as a global superpower has become the envy of other countries.

He said as a result of its success, others view China as a rival to them.

Anwar took a swipe at the United States, led by President Donald Trump, which is now involved in a trade war with China.

"A country that promoted free trade for hundreds of years has started a trade war," Anwar said, adding that the world has changed and it is no longer the period when a superpower can bully others. 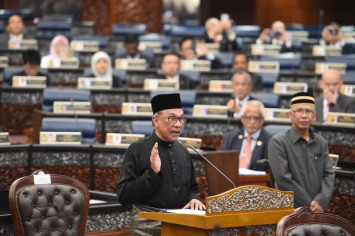 On Malaysia-China bilateral relations, Anwar said both countries could engage in more co-operation, such as in artificial intelligence and robotic technology, other than in infrastructure projects.

"China's growth is legendary - it can be a great partner in development," he said, noting that Malaysia and China could share experience and join hands in training, research work and technology transfers.

Anwar's Beijing visit is seen by many as a move by Malaysia to reconcile with China following Putrajaya's decision to review several major China-linked projects, such as the cancellation of the Kuala Lumpur-Singapore High Speed Rail (HSR) and renegotiation of contract on the China-financed East Coast Rail Link.

Observers noted that Anwar's visit comes at a time when the current relationship between both countries is seen as "delicate".

Anwar also talked about syariah law, saying that the Islamic law was misrepresented by people who propagated violence.

"A vast majority of Muslims, one billion of them, want peace and believed religion is meaningful. There is no sense in being religious if we don't believe in peace," he added.

He emphasised that no country would tolerate violence and extremism.

"We have to be very tough against elements that disrupt the society," he said.

Anwar also said it would be good to see the neighbouring countries doing well as the problem of illegal migration would be much lesser.

On the new Malaysian government under Pakatan Harapan, Anwar said it is important for the elements of the rule of law and good governance be maintained to help to bring Malaysia on the right track to success.

He said the law was not just about punishment, but justice as well.

"The law is not a crafting of sophisticated legal entities or a declaration of complex legal treaties, but to ensure justice is maintained."