Anwar: I accept it's not Azmin in the video

The party based this on a recent statement made by Inspector-General of Police Datuk Abdul Hamid Bador, said Anwar, adding that PKR acknowledged that police investigation was ongoing.

“On allegations that there are members and party leaders involved in the distribution of said video, PKR will not hesitate to take action according to the party constitution if any members are involved and convicted by law,” he said.

Anwar said the police should be allowed to complete their probe.

“I would like to reiterate that PKR strictly rejects gutter politics,” he said while reading from a prepared statement yesterday.

Anwar was flanked by several party leaders at the media conference held on the sidelines of the party’s three-day retreat here.

Asked if this meant he was glad Azmin had been exonerated, Anwar said the party viewed the IGP’s statement positively.

“We are glad that he said the initial investigations (to probe if Azmin was involved in the sex video) have been negative.

“We do not wish to pre-empt anything, and the police should be allowed to wrap up their probe.

“We are glad with the assertion that Azmin is not involved based on the facial recognition process, which has turned out to be negative as they can’t establish the characters in the sex clip” he said.

The IGP had said that CyberSecurity Malaysia could not identify those in the video through facial recognition.

“We received the analysis of the video from CyberSecurity.

“It is a high probability that the video is genuine, but facial recognition came back negative.

“It could not link those in the video with any individual,” Abdul Hamid said in a statement on Thursday.

PKR had been rocked by a viral sex video featuring two men which was distributed via social media last month. 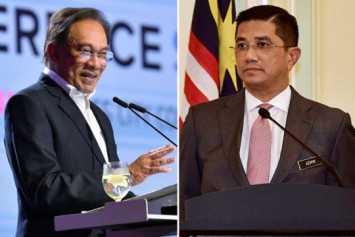 PKR member Haziq Abdullah Abdul Aziz confessed that he was one of the two men and alleged that the other was Azmin at a hotel in Sandakan, Sabah.

Anwar and Azmin had an open feud recently in the media when the former said the latter should resign if it was proven that he was indeed the man in the video clips.

Azmin retorted that Anwar should instead “look in the mirror”.

As of July 20, 11 men including Haziq and Anwar’s political secretary Farhash Wafa Salvador Rizal Mubarak have been arrested and remanded by police over the video clips.