Anwar: I will not seek an immediate return to politics

Malaysian politician Anwar Ibrahim kisses his wife during a news conference in Kuala Lumpur, Malaysia May 16, 2018.

KUALA LUMPUR: Datuk Seri Anwar Ibrahim says he will not seek an immediate return to politics and will take some time off with his family.

Anwar also said the Dr Mahathir as premier had the prerogative to form the Cabinet, but added that the Prime Minister had given him assurance that he will consult party leaders before deciding on its composition.

Anwar walked out of the Cheras Rehabilitation Hospital at 11.30am on Wednesday (May 16) where he was held over his second sodomy charge.

After his release, he met the Yang di-Pertuan Agong where he was granted a royal pardon. 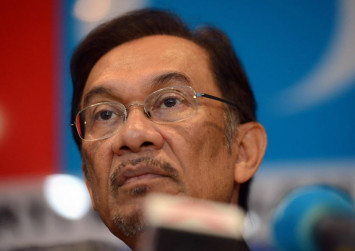 In 2015, Anwar was sentenced to five years' jail after the Federal Court upheld his guilty verdict for sodomy.

Anwar was initially scheduled to be released on June 8, 2018 after his five-year sentence that started on Feb 10, 2015 was reduced for good behaviour. His release came a week after Pakatan Harapan defeated Barisan Nasional at the polls on May 9.