Anwar in no rush to get back into Parliament

PETALING JAYA - There are no plans to get PKR de facto leader Datuk Seri Anwar Ibrahim back in Parliament when it convenes next month.

"It will not be this coming parliament session, maybe after that," Anwar told reporters after attending a closed door gathering with PKR assemblymen and parliamentarians here today. (Wednesday).

He said that discussions on his return as a lawmaker will only be held two months after the Hari Raya festivities and scheduled trips abroad.

Asked if his wife PKR president Datuk Seri Dr Wan Azizah Wan Ismail would give up her Pandan parliament seat for him to contest, Anwar said he refused when offered. 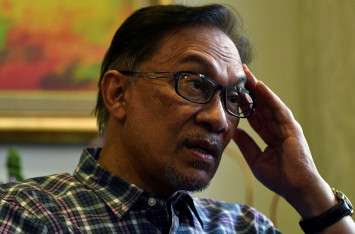 "She (Dr Wan Azizah) offered her seat to me, but it would be impractical as she will have to quit her Cabinet post prematurely.

"I have no intention for a cabinet post. If I win, I'm comfortable being just a normal backbencher," he said.

Anwar said that being a backbencher would give him the freedom to engage in other activities including speaking at universities locally and abroad.

On May 16, the Yang di-Pertuan Agong Sultan Muhammad V granted Anwar a royal pardon with regard to his conviction for sodomy in 2015.

The pardon paved the way for Anwar's return to Parliament as a lawmaker.