PETALING JAYA - Pakatan Plus has gained the support of 107 MPs, according to Opposition leader Datuk Seri Anwar Ibrahim.

With this number, the PKR president and Port Dickson MP said the loose coalition would be able to move forward as one team to regain the people's mandate.

He said to take on the Perikatan Nasional government, the Opposition must put up a united front.

"We gathered and we got a consensus. No matter what the strategy is, we must stick together. The Opposition must be firm in its stand.

"Now we have 107 (MPs) in this group, and we will move forward as a team to ensure that the people's mandate is respected and the inconsistencies and corruption is halted, " he said during a Facebook Live session yesterday.

Pakatan Harapan now has 91 MPs, Parti Warisan Sabah (nine), Bersatu (five), Parti Sarawak Bersatu (two) and Upko (one) - which is one seat more than the 107 announced by Anwar.

Pakatan Plus is the moniker for a loose coalition that includes Pakatan, the faction in Bersatu being led by Dr Mahathir, and Warisan.

Anwar also said while the government's RM35 billion (S$11.42 billion) National Economic Revival Plan (Penjana) was a positive move to tackle the Covid-19 economic fallout, the stimulus package has not been debated in Parliament.

"No chance was given to MPs on both sides of the divide to question and ask for explanations, " he said.

"This is the only country in the world where the government can table billions in funds without debate."

Anwar said the government must take swift action in addressing economic issues that were expected to spiral downwards in the coming months.

He said talk of a V-shaped recovery in Malaysia was merely a projection, as figures shown by Singapore indicated a negative 8 per cent economic growth.

"I think it is appropriate that we debate whether this projection (V-shaped recovery) is realistic or reasonable, " he added. 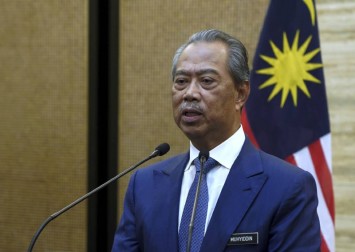 "Don't take into account the total that was announced as it involves the banks, Employees Provident Fund and Socso, " he added.

Anwar said the two months of Covid-19 preventive measures had led to losses of up to RM133 billion, taking into account that the Malaysian economy was valued at more than RM1.6 trillion.

In his earlier remarks, Anwar described the current political developments as unhealthy, with politicians turning into mere "items" to be purchased for ministerial and GLC positions.

"Our loyal friends who are principled will not be enticed by the promises of positions, " he added.

Anwar said nearly every GLC position was filled by politicians, who included MPs aligned with Perikatan since it took power in March.

"Try to imagine, not every MP is qualified for that field. Don't tell me that among the millions of Malaysians who have various professional qualifications, only politicians are qualified, " he added.