PUTRAJAYA - The absence of PKR chief Datuk Anwar Ibrahim at a Pakatan Harapan top leadership press conference raised questions but this was attributed to a clash in the timetable.

He said that many of their MPs and Anwar himself had prior engagements, adding that the press conference yesterday was called at the last minute.

"Anwar was scheduled to have an interview with The New York Times yesterday, hence his absence from the press conference.

"This (press conference) wasn't planned ahead of time, so, many PKR MPs already made plans to return to their respective constituencies to help with Hari Raya Aidilfitri preparations and Covid-19 assistance," said Fahmi when contacted.

Earlier, news portal Malaysiakini quoted an anonymous PKR MP as saying that Anwar was not keen to join the press conference, as he did not want to be used by Dr Mahathir.

However, Fahmi disputed the report, saying that there was no such instructions given to PKR MPs.

"I was with Anwar this morning. No such instructions were given to me to relay to any MPs," he added.

Fahmi also expressed confidence that Malaysians would soon see the two leaders, who were former archnemeses, appearing publicly in a united front.

"Yes. I think it would be a matter of time. As for today (yesterday) it's just that some arrangements had been made earlier," he said.

Fahmi's account was also corroborated by Selayang MP William Leong, who said there weren't any instructions to not attend the Pakatan press conference.

"There weren't instructions from Anwar. But I had other things to do," he said, adding that he made prior arrangements. 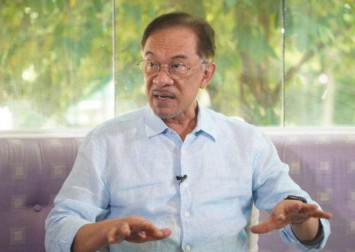 Meanwhile, Shah Alam MP Khalid Abdul Samad explained that the press conference was not organised by Pakatan, but by Dr Mahathir himself, as he wanted to address issues regarding Parti Pribumi Bersatu Malaysia (Bersatu).

"There wasn't a decision that compels everyone to attend. It depends on them.

"The press conference was called for by Dr Mahathir and Warisan to address issues concerning Bersatu's current situation," he said.

The absence of PKR MPs and Anwar during the Pakatan press conference called after the one-day Parliament meeting raised questions as to whether the sentiment of distrust against Dr Mahathir was still present within PKR.

When quizzed on Anwar's absence during the press conference, Dr Mahathir said:

"He has sent a statement but is not able to attend."

Bersatu is currently divided between Dr Mahathir and Prime Minister Tan Sri Muhyiddin Yassin, with the former wanting to return to Pakatan and the latter wanting to remain with Perikatan Nasional.

It was understood that certain PKR MPs were not comfortable with the idea of working with Dr Mahathir again, as Bersatu was blamed for the collapse of the Pakatan government in February.