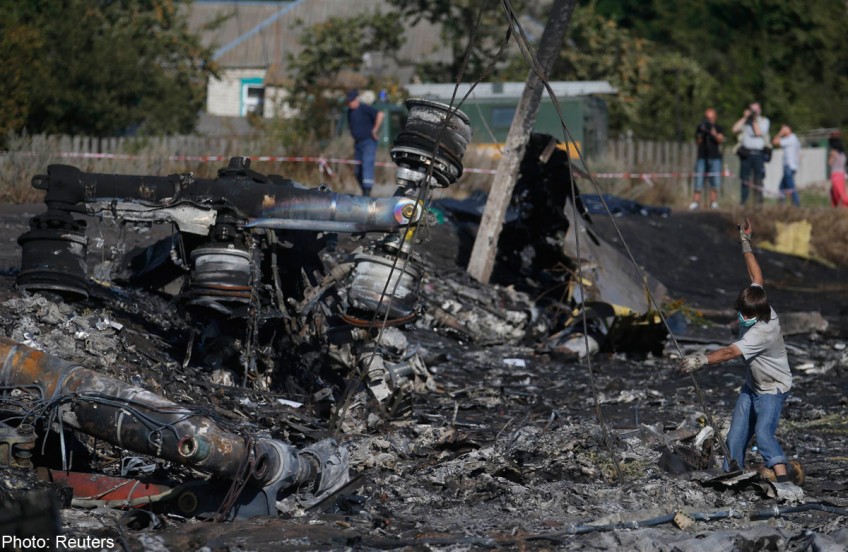 SYDNEY - Australian Prime Minister Tony Abbott Monday hit out at the "shambolic" situation at the MH17 crash site as he demanded Russian President Vladimir Putin back up assurances with action.

Abbott and Putin spoke by telephone overnight in their first conversation since the Malaysia Airlines plane, carrying 298 people, crashed in eastern Ukraine on Thursday, apparently shot down by pro-Russian rebels with a surface-to-air missile.

While Abbott would not divulge details of what was discussed, he said the onus was now on Moscow to act, using its influence with pro-Russian separatists to ensure experts can access the site of the crash.

"To President Putin's credit he did say all the right things. I want to stress what he said was fine," Abbott told a press conference.

Abbott has been particularly vocal among world leaders in his outrage at Russia's perceived lack of cooperation in the investigation into the disaster.

He has branded the plane's downing "a crime", and accused Moscow of trying to wash its hands of the tragedy while failing to properly secure the crash site.

Moscow denies any involvement in the disaster.

Twenty-eight Australian nationals and nine residents were among the 298 people from a dozen countries on board who died.

'Bodies are not hostages'

Abbott said every day that went by the bodies were deteriorating and the crash site was being further contaminated.

"As anyone who has been watching the footage will know, this is still an absolutely shambolic situation," he said.

"The site is being treated more like a garden clean-up than a forensic investigation." He added that his key goals were "to retrieve the bodies, we want to investigate the site, and we want to punish the guilty. That's what we want to do".

The comments follow Australia on Sunday circulating a draft UN Security Council resolution - that could be put to a vote as early as Monday - demanding that pro-Russian separatists provide "full and unfettered access" to the site.

Abbott said that having pro-Russian rebels in charge of the crash zone was "a little like leaving criminals in control of a crime scene".

He dispatched Foreign Minister Julie Bishop to the United States to lead the lobbying for support of the resolution.

She said it was "an utter outrage" that the site had been contaminated and evidence removed.

"This is not a time to use bodies as hostages or pawns in a Ukrainian-Russian conflict," she told reporters in Washington.

On Sunday, pro-Russian militiamen in Ukraine loaded almost 200 bodies from the flight into refrigerated train wagons. A rebel chief said they were holding them until "the experts arrive".

Canberra wants a full and impartial investigation in the disaster, but Abbott said a key difficulty was that there was "no-one in authority in charge on the ground".

He said Monday he had sent former defence force chief Angus Houston to be his personal envoy on the ground in Ukraine and to help recover the remains of the Australians killed.

Abbott added that the government was considering designating the MH17 disaster as a terrorist attack, which would trigger compensation payments to the families of Australian victims.