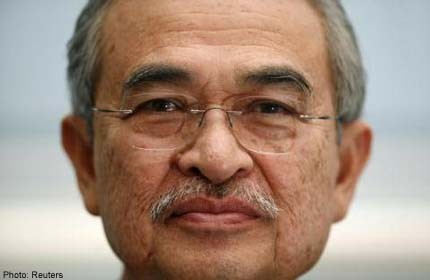 PETALING JAYA - Awakening: the Abdullah Ahmad Badawi Years in Malaysia may not have been written by Tun Abdullah Ahmad Badawi himself, but his 38-page candid contribution to it offers his side of the story - a frank and revealing reflection on his single term as Malaysia's fifth prime minister.

He addresses a myriad of issues such as his strained relationship with predecessor Tun Dr Mahathir Mohamad, his sleep disorder which caused him to unwittingly doze off on the job, the controversial "fourth floor boys" and his efforts to allow more space for democratic discourse.

Abdullah, fondly known to most as Pak Lah, rose to power in October 2003 and helped secure Barisan Nasional's largest victory in the 2004 general election when it won 90 per cent or 198 of 219 seats.

However, after a tenure marred by increasing public perception that he could not deliver his promises of reform, Barisan failed to win two-thirds majority in 2008. Consequently, Abdullah resigned on April 1, 2009, passing the reins to Datuk Seri Najib Tun Razak.

"I was sandwiched between an electorate who had high expectations of reform and change, an administration and party leaders who were resistant to this change. It was very difficult trying to manoeuvre, trying to find a balance.

"Mindsets had been institutionalised after so many years of doing things the old way. Unfortunately, this is something that people failed to appreciate," he said in an excerpt from his interview "Doing the Invisible" in Awakening, speaking to political analysts Prof James U.H. Chin and Dr Bridget Welsh.

Abdullah, 73, confessed that the establishment's resistance to the change and reforms was something he had underestimated, adding that he had been "perhaps too idealistic".

On Dr Mahathir's strong public criticism of him throughout his tenure, he said it all stemmed from the fact that his predecessor was unable to "accept any other views except his own".

He described Dr Mahathir as "most unkind" for saying he dozed off because he was not interested in his job. He revealed that Dr Mahathir knew he had been diagnosed with sleep apnea during his tenure.

Abdullah also expressed firm belief that his son-in-law Khairy Jamaluddin along with the other "fourth floor boys" accused of helping him run the country, had been "demonised" and he insisted that they had not influenced him on policy matters.

On why the Chinese community had turned its back on him in the 2008 general election, he said it was the "sabre-rattling and Malay political rhetoric" that was to blame, pointing to the "racist and inflammatory remarks" made by several Umno delegates during the first live telecast of its general assembly in 2006.

"This did us grave damage. I had hoped that my party members would temper their strength with humility but instead, some leaders and members - because of the overwhelming majority of 2004 - became abrasive, arrogant, offensive and unaccommodating," he said.

Abdullah expressed sadness that after over 50 years of independence, race and religion were still an issue. He also agreed that there was a lack of understanding from certain Islamic groups regarding inter-faith dialogue.

In the book's introduction by Prof Chin and Dr Welsh, they said Abdullah's impact on Malaysia "continues to be underestimated by many" and his administration period is often dismissed.

"Yet many of the policies that he pursued and decisions that he made allowed the nation to change significantly," they said, adding that this included the empowerment of civil society for change, through more space for political debates in mainstream media.

In his interview with Prof Chin and Dr Welsh in the book, Zaid opined that Abdullah had not been prepared to weed out those who opposed his reform agenda, and had miscalculated badly in retaining Dr Mahathir's men in his Cabinet after his 2004 victory.

"He did not want bloodshed. He maintained his normal routine, and he lost. The rest is history," he said.

Liew, who spoke to Prof Chin and Dr Welsh about the Opposition's transformation during Abdullah's tenure, said that Abdullah's inability to set the agenda had been a "toxic combination" with his allowance for greater mainstream media freedom, which helped the Opposition widen its reach to a national audience.

In his own commentary published in the book, Dr Denison, who reflected on Abdullah's socio-economic agenda and its relevance and impact on the Indian community, opined that history would judge him well for the reforms he started and note his inability to execute them.