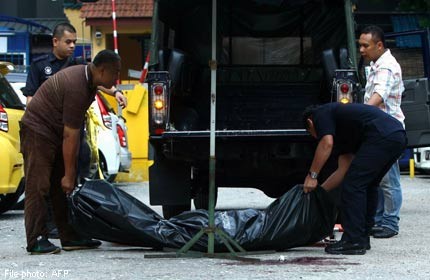 KUALA LUMPUR - Three days since the identity of the suspected shooter of banker Hussain Ahmad Najadi was released, no one has come forward to give police more information.

City police chief Senior Deputy Comm Datuk Mohmad Salleh said he was disappointed with the lack of new leads. "We need to work together to find this man. Any information on the case should be passed to us immediately," he told pressmen after attending the Tun H.S. Lee traffic police station Hari Raya open house here Thursday.

SDCP Mohmad said checks with the Immigration Department showed that Kong had not left the country.

It was reported Tuesday that the bespectacled man, or "Sei Ngan Chai" in Cantonese, sought by police over the murder of Arab-Malaysian Bank founder Hussain Ahmad Najadi was identified as 44-year-old Kong Swee Kwan.

The man was identified based on the interrogation of two others, including a taxi driver who is being held under remand.

Further investigations revealed that Najadi had played a role in protecting the interests of the Kuan Yin Temple in Jalan Ceylon.

The temple stands on a portion of land that was being negotiated for sale.

Police revealed that Najadi was not a buyer or seller in the deal but was merely there to ensure the temple would not be sold or demolished.

On July 29, Najadi, 75, was gunned down and his wife was injured in the hand when a man opened fire at them at a car park outside the temple. The gunman was seen escaping in a taxi with the taxi driver and another man.