Be sensitive to other religions, MCA president tells Netizens 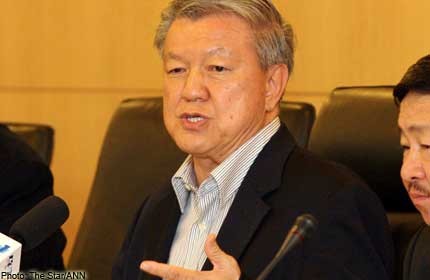 JOHOR BARU - MCA president Datuk Seri Dr Chua Soi Lek (above) has condemned those who are insensitive towards other religions in the wake of another offensive posting circulated on the Internet.

He said it was sad to see rampant occurrences of inconsiderate people especially the youth in expressing themselves.

"This is a bad sign as everyone needs to be understanding and aware of cultural and religious sensitivities," he said after attending Deputy Prime Minister Tan Sri Muhyiddin Yassin's Hari Raya open house in Pagoh yesterday.

He added that the recent posting of a Ramadan greeting with a photograph of bak kut teh and the caption Selamat Berbuka Puasa by sex bloggers Alvin Tan and Vivian Lee had created tension and now, the latest picture depicting the head of a pig beside a plate of lemang and ketupat.

"The community and especially the youth need to be more sensitive towards such issues. We have been independent for almost 60 years now and there is no point in just going to each other's house and feasting during festivals but we need to understand each other's sentiments and feelings as well," he said.

The latest offensive photo was said to be posted by Alan Tang, who is the assistant to Stulang assemblyman Andrew Chen Kah Eng. But Tang believed he was framed.

He said he was shocked when a friend informed him of the post.

"The person who uploaded the picture made it look like I had posted it from my personal Facebook account," Tang said, adding that he had lodged a police report on the matter on Thursday.

Johor deputy CID Asst Comm Nor Azizan Anan confirmed the report, saying that police were seeking the help of the Malaysian Commu­nications and Multimedia Com­mission on the incident.