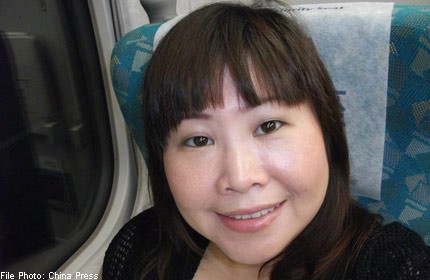 Malaysian Amy Liew, a beautician, was stabbed to death during a robbery at her shop in Johor Baru.

MALAYSIA - A beautician was stabbed to death during a robbery at her shop in Johor Baru. Ms Amy Liew, 39, was attending to a customer when two robbers struck at about 11.30am on Saturday, reported Malaysia's The Star.

Nusajaya deputy OCPD Deputy Superintendent Razak Md Said said the two suspects, a man and a woman who appeared to be in their 20s, entered the shop pretending to be customers.

"When the worker went out to see what was happening, she saw the victim lying unconscious on the floor and bleeding from her nose."

The victim had been stabbed twice in the abdomen and had four slash wounds on her neck, one on her back and another on her right hand.

DSP Razak said the robbers stole a mobile phone, a laptop and cash. There were no closedcircuit televisions inside or outside the shop.

The man and his girlfriend were returning from supper when they were ambushed by two parangwielding men at 4.30am on Saturday.

One of the robbers grabbed the woman's handbag as she wound down the window after getting into the man's car. The bag contained a mobile phone and RM300 (S$116).

The man then got out of his car to chase after the robbers. He returned a few minutes later huffing and puffing, but without the bag.

As he slumped back into his car seat, he began to have breathing difficulties and fainted.

Sentul OCPD Assistant Commissioner Zakaria Pagan said the woman, a Chinese national, tried to revive him by pinching his nose and blowing into his mouth, but the man did not regain consciousness.

The case has been classified as sudden death, pending a post-mortem.