In a Facebook post on Wednesday (May 30), Mr Najib said studies show that the HSR project, which would link Kuala Lumpur to Singapore, would bring socio-economic benefit to both countries.

"The projections from the relevant report I have seen indicate an estimated economic benefit of RM650 billion (S$218 billion) in gross national income by year 2069.

Read Also
Mahathir: Show us proof that Malaysia will lose over RM200 billion if HSR is cancelled 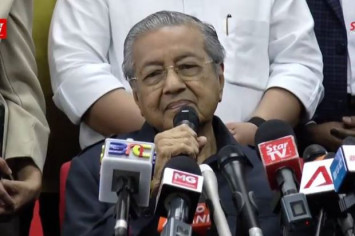 Mr Najib also questioned how the government arrived at the conclusion that the project would cost about RM110 billion.

He said the costs of the project as of early this year stand at about RM72 billion, taking into account payments made to citizens for land transfer.

"The true cost can only be known when the tenders for the design, construction, financing and maintenance of the rolling stocks and assets of the rail are fully closed on Dec 28 this year," he said.

He also questioned if the agencies involved in the project have been given a chance to present their case before the Cabinet and the Council of Eminent Persons.

Mr Najib said he is disappointed with the rash decision to drop the project, and urged the government to act with integrity by hosting consultations before making any decision.

On Monday, Prime Minister Mahathir Mohamad confirmed that the HSR project to Singapore would be scrapped.