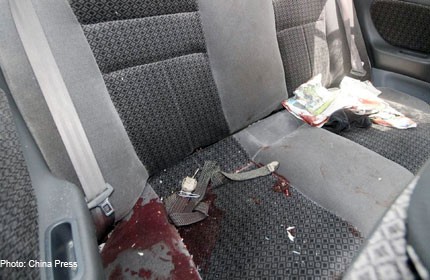 TERRIFYING: Blood found in the suspect’s car at the scene.

The mother of two teenage daughters was woken up by what sounded like gunshots.

Ms Roshana Abdul Rahman, 39, and her daughters peeped out of the living room window to see what was happening.

Her neighbour, who had also woken up by then, told them there had been an accident.

They followed him to the scene about 100m away from their homes and were shocked to find that a shooting had taken place, Malaysia's The Star reported.

Blood was splattered all over the place, the result of a gun battle which saw three men shot dead by police.

The trio were high on the wanted list and were trying to avoid a police roadblock.

When officers tried to stop their car at about 1.50am on Tuesday in Gerik, Perak, its occupants opened fire.

Inspector-General of Police Khalid Abu Bakar said: "Police returned fire to defend themselves and the suspects were killed in the exchange. None of our personnel were injured."

Ms Roshana's daughter, Nurliyana Mohd Ariffin, 15, said they were afraid to go near the car, which was surrounded by policemen. She told The Star: "It was terrifying to know that such an incident actually took place in a quiet housing area like ours."

The hunt for the suspects was done under Ops Cantas Khas or "cut-off operation", which began in August.

It was launched following a spate of shootings in Malaysia, believed to be related to a turf war among gangs linked to illegal activities, such as drug trafficking and extortion.

The car bore Pahang registration plates, but the dead men were from Kelantan.

The trio were allegedly involved in the murder of a steamed-rice seller in Terengganu and had also tried to kill a single mother in Pahang.

Said Mr Khalid: "They had also committed car thefts and robberies, and had been especially active since six months ago."

The trio, who were believed to be organising "criminal activities" in Perak, were known to be ruthless and would "do anything to get what they wanted, including murder", the police said.

Investigations revealed that two of the suspects were involved in six criminal cases and the third in two.

Mr Khalid said investigations were ongoing to find out if the three had been hired as assassins.