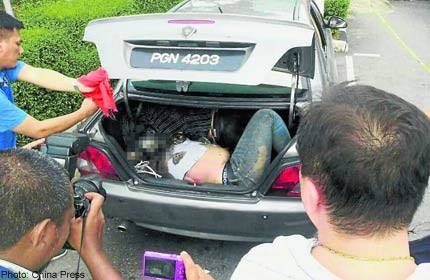 The bodies were found in the trunk of a Proton Waja at the south-bound Alor Pongsu rest and recreation (R&R) area of the North-South Expressway near Bagan Serai.

MALAYSIA - It is always a bad sign when flies start hovering.

The stench coming from the Proton Waja, parked near a rest and recreation (R&R) area of the North-South Expressway near Bagan Serai in Perak, was so bad that nobody wanted to go near it.

When police opened the boot of the car, they found two bodies, allegedly with their hands and legs bound and their heads wrapped with plastic bags, The Star reported.

The bodies were discovered around 4pm on Friday, The New Straits Times reported.

The Penang-registered car was parked in front of the ladies' toilet at the rest area.

Witnesses said that the car had been there since Thursday evening.

The victims have been identified to be Mr Ting Liong Chin, 28 and Mr Seu Hong Chee, 19.

Documents bearing their names were also found in the car.

A worker at the rest and recreation area said the car was locked and he was not sure who had left it there. He then called the police.

He said the police had to break open the car window to open the boot.

Police said two men were believed to have left their house in Penang in the car at about 2.45pm on Wednesday.

It was not clear where they were heading to, said a police source.

"We are still carrying out further investigation on how the bodies ended up there and the motive for it," he told The Star.

Illegal moneylending activity is believed to be the motive behind the double murder, the report said.

Malaysia's China Press reported that the men killed were debt collectors, sent out by their company to chase a bad debtor.

The family of Mr Seu described him as a loving person.

A relative who declined to be named said that they last saw him during a family gathering in Kuantan, Pahang, in August.

"He will not fail to call back home once in two days, but when we did not receive a call from him two days ago, we become worried."

The relative added that his family then lodged a missing persons report.

Their worst nightmare came true when police informed them that they found Mr Seu dead.

They refused to talk to reporters.

Police believe that the bodies were murdered at another location before they were left at the R&R area.