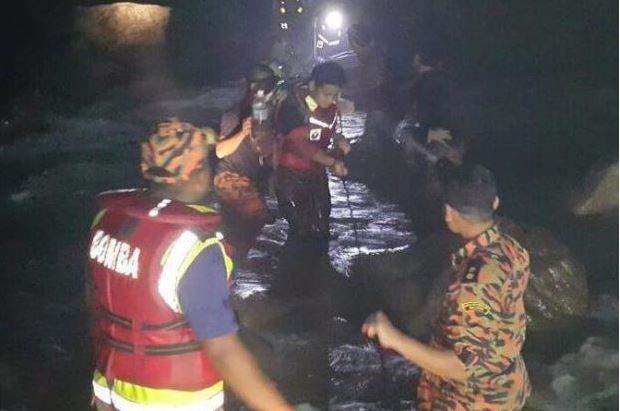 Firemen rescuing the people stranded after a water surge at the Sungai Chiling.
The Star

It is believed that the victims were on a hill-climbing activity when the incident took place on Sunday.

Selangor Fire and Rescue Department assistant director (operations) Mohd Sani Harul said on Monday that a team of 13 firemen were deployed to the scene after a distress call was received at about 7pm.

"The first group of seven Pakistanis were rescued at about 10.45pm," he said.

It was learnt that the second group was rescued several hours later and brought out of the area at about 2am.

An unidentified victim also received immediate treatment by the medical team at the scene for leg cramps.

Meanwhile, Bernama reported that rescuers were forced to wait for the water level at the river to recede before conducting a search and rescue operation.

However, alternative routes were worked out to reach the trapped victims.

The search and rescue operations were called off at 2.50am.