Boy, 12, flees home as grandparents and siblings are 'murdered and set on fire'

BANTING, Selangor - The fire at a house in Tanjung Sepat here, which claimed the lives of two senior citizens and two young boys, has taken a morbid turn after police discovered slash marks on the victims.

"The victims are believed to have been murdered and set on fire.

"However, the cause of death will only be confirmed after the postmortem," Selangor CID chief Senior Asst Comm Fadzil Ahmat said in a statement on Wednesday. Firemen carrying out investigations at the house after the firePhoto: The Star/Asia News Network

The postmortem is expected to be carried out on Thursday (Dec 14).

He added that the case was being investigated under Section 302 of the Penal Code for murder. 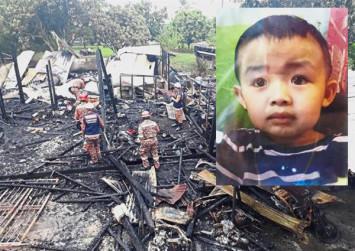 The victims have been identified as a 73-year-old man and a 68-year-old woman, while the boys were aged nine and three.

" target="_blank">video making its rounds on social media, a 12-year-old boy, believed to be the sole survivor of the incident, claims masked intruders entered the house and murdered his brothers and grandparents.

He said he was hiding in the toilet throughout the ordeal and managed to escape the fire when the intruders left.