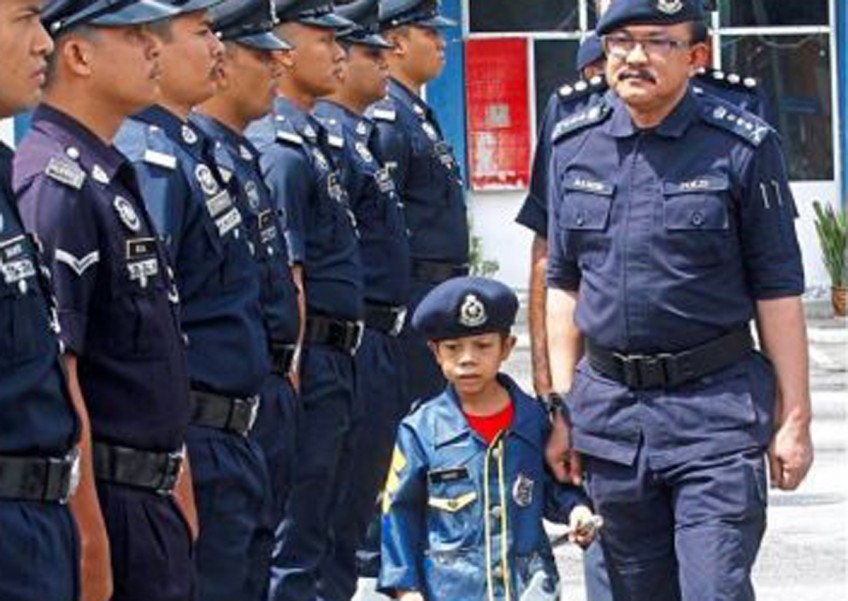 And the five-year-old, who has been diagnosed with Burkitts lymphoma cancer, is delighted after being appointed policeman for a day by Penang police chief Comm Datuk Wira Abdul Rahim Hanafi.

Mohd Uzair, from Taman Ilmu, was presented with a policeman's tunic at the south Seberang Prai district police headquarters in Jawi here.

Burkitts lymphoma cancer is recognised as the fastest growing human tumour and is associated with impaired immunity. It is fatal if left untreated.

When he arrived at the police headquarters at about 10am, Comm Abdul Rahim was introduced to the boy and he immediately took Mohd Uzair to a patrol car and made him sit inside to get a feel of it.

The boy was then escorted into the hall where he joined Comm Abdul Rahim and the policemen there in singing Negaraku and the state anthem.

Comm Abdul Rahim in his speech, welcomed Mohd Uzair as policeman for a day.

This was followed by the boy being taken on a tour of the police headquarters including the enquiry room and was briefed about the duties of a policeman.

An excited Mohd Uzair also witnessed a march past and followed Comm Abdul Rahim to inspect the guard of honour before he and his parents, Mohd Noor Azlan Ahmad, 46, and Zakiah Mohd Yusof, 38, went for a short ride in a patrol car, which was driven by Comm Abdul Rahim himself.

"I am very happy to be able to fulfil a little boy's dream," said Comm Abdul Rahim.

He then presented Mohd Uzair with a toy patrol car.

Mohd Noor Azlan, who is attached to the Parit Buntar Hospital, said his son was diagnosed with the disease last year.