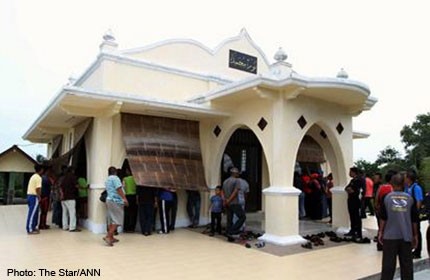 PETALING JAYA - A Buddhist leader has apologised on behalf of the Buddhist group which had used a surau in Johor for a worship session.

The Chief High Priest of Malaysia Datuk K. Sri Dhammaratana exp­res­sed regret over the incident and called on followers of the faith to be more mindful of religious sensitivities of others.

"We would like to apologise to our Muslim brothers and sisters for the actions of a certain Buddhist group from Singapore in having their meditation session at the surau of a resort in Kota Tinggi," he said in a statement yesterday.

"I advise Buddhists in Malaysia and Singapore to respect the religious sensitivities of others while carrying out our own religious obligations and responsibilities," he said in reaction to a video, depicting a group of Buddhists led by a monk chanting inside the surau, which has gone viral on social networks.

Titled Surau dijadikan tokong Buddha di Johor (Surau converted to Buddhist temple in Johor), the video showed the group sitting on mats while facing a picture of a Buddhist religious figure, which was placed on a table underneath Quranic verses that were hung on one of the walls.

The 45-year-old operator of a resort in Tanjung Sedili Besar, who had allowed a group of Buddhists to meditate, was arrested at the resort on Monday.

MCA, in a statement, called for harsh action in dealing with those who were disrespectful of religious sensitivities.

MCA central committee member Loh Seng Kok said several "shameful" religious issues raised over the past few weeks were a test of Malaysians' patience and fortitude as a multiracial society.

"We should not allow our emotions to get the better of us, but instead learn from these experiences. These events serve to remind us of the importance of living together in peace," he said.

PAS Youth Information chief Riduan Mohd Nor said it was surprising that the group had chosen to use a place of worship belonging to a different faith.

"Islam strictly forbids the use of its places of worship by those of other faiths. Using surau or mosque as a place of worship for other religions is an insult to Islam," he said, calling for the resort owner to be severely punished.