A businessman was attacked by a group of eight men armed with sticks after he accidentally knocked into the car of one of the suspects.

Johor Baru South OCPD Asst Comm Shahrurinain Jais said that the 44-year-old victim was driving along Jalan Sutera to look for a restaurant to dine with his family when he accidentally knocked on the side mirror of another vehicle.

"The owner of the car was outraged by the incident and attacked the victim with seven other friends.

"The suspect hit the victim's car with a stick several times, forcing him to go out of the vehicle where he was attacked by a group of men, " ACP Shahrurinain said in a statement on Thursday (Aug 15). 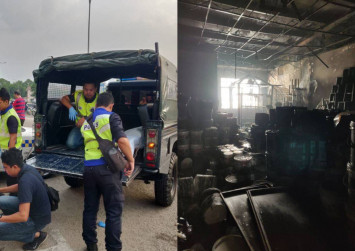 He added that the victim suffered injuries on the head, left hand and at the back of his body as a result of the attack.

"A police patrol team that was monitoring the area spotted the incident and intervened before it escalated further, " he said.

He added that the car owner who started the brawl was arrested to assist in investigations, but said that the other suspects managed to escape.

ACP Shahrurinain said that the case is being investigated under Section 148 of the Penal Code for rioting with weapons.