A businessman lost his mother and niece in an arson attack at his hardware shop in Taman Bukit Indah here.

The Johor Fire and Rescue Department received a distress call about the fire, which broke out at the double-storey shophouse at 4.34am on Monday (Aug 12).

Six fire engines from Iskandar Puteri, Larkin and Skudai fire stations and 28 firemen were deployed to the scene at Jalan Indah 8/15.

Iskandar Puteri OCPD Asst Comm Dzulkhairi Mukhtar said that a family of five, who runs the hardware business, has been renting the premises since 2013.

"The family lives on the second floor, which has two rooms, a living room, kitchen and a storeroom where they kept paints.

"There are five people, two males and three females, between the ages of six and 60, inside the shop when the incident occurred, " he said here on Monday (Aug 12) night.

ACP Dzulkhairi said that two females, between the ages of 60 and 20, died at the scene while the survivors were rushed to Sultanah Aminah Hospital here for treatment.

He said the survivors were the businessman, his wife and son.

Read Also
5 children killed in US daycare fire; owner crashes her car while driving herself to hospital 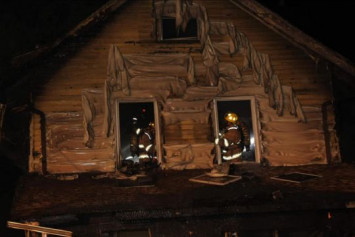 ACP Dzulkhairi added the victims who died at the scene were the businessman's mother, Hoe Mun Moy, and his niece, Yeow Yai Wen.

ACP Dzulkhairi said initial investigations revealed that the fire was believed to have started from the back of the shop where there was a strong smell of fuel.

"A closed-circuit recording at the premises captured an unidentified man carrying a plastic bottle where we believed it's filled with fuel before the fire started, " he added.

He said the case was being investigated under Section 436 of the Penal Code for arson and sudden death.

ACP Dzulkhairi urged those who witnessed the incident or have any information pertaining to the case to contact the Johor police hotline number at 07-221 2999 or lodge a report at the nearest police station.