No go: A map showing the proposed cable car link from the Botanic Gardens to Penang Hill.

GEORGE TOWN- The Penang government is disappointed that the RM100 million (S$32.8 million) Penang Hill cable car project has been cancelled by the Federal Government, but environmentalists are cheering.

Chief Minister Chow Kon Yeow said the cancellation would not only affect the continuity of the Penang Hill development plan but also the state's economy in general.

"In the current economic situation due to the Covid-19 pandemic, public infrastructure like the cable car project would stimulate the local market, provide job opportunities and cause other ripple effects to the state's economic development, " he said in his daily message from his official Facebook page yesterday.

The RM100 million allocation for the cable car project was announced during Budget 2020, which was tabled by then Finance Minister Lim Guan Eng.

The pre-feasibility study of the project is still in process and is expected to be completed in the second half of the year.

Chow said the available data would be kept for future use, adding that the state would discuss further with the Federal Government pertaining to the decision.

It was earlier reported that about eight to 10 pylons would be needed to support the network, which links the Penang Hill summit to a station outside the gates of the Botanic Gardens, near the Penang Rifle Club.

Read Also
Dining-in with peace of mind in Penang 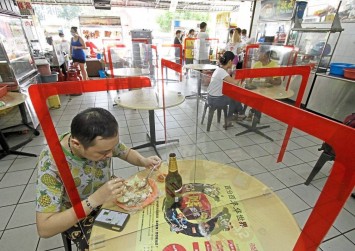 "The cable car project is not environmentally sustainable, both to the hill and Botanic Gardens and to assume so would be misleading.

"The cable car project, if implemented, will cause irreparable damage to the Gardens and Penang Hill through the building of more hotels, bungalows for the rich elites, cafes, amusement joints and roads.

"In order to carry out the cable car project, a major issue will be on how the heavy pylons are going to be brought in and installed, which will require road-building, excavation and construction work.

"Once the construction works are over, maintenance tracks below the cable car line will be needed.

"All this will cause much disruption to the fragile and environmentally sensitive areas on Penang Hill and the Botanic Gardens, " she said.