Chocolate treat for police barred, so firemen get them

KUALA LUMPUR - It was supposed to be a tongue-in-cheek response to allegations of cops taking chocolates from a fridge at a posh apartment when investigating funds linked to 1Malaysia Development Bhd (1MDB).

But the "Chocsforcops" campaign has started to pick up steam and is set to become an annual affair as a sign of appreciation for those serving the people and country.

The novel idea behind this is flamboyant lawyer and social acti­vist Siti Kasim.

Originally, she planned to hand over the treats to the Sri Hartamas police but was told they were not allowed to accept treats.

Unperturbed, she presented them to an adjacent fire station.

"My intention is to simply show that the people support the police and I think they are equally thrilled with the idea.

"I asked beforehand and was told that they had a directive to refuse the treats.

"So, I decided to give them to firemen. They are just as important in serving the community," she said.

Two firemen obliged and took wefies with them. One even quip­ped that he would be having a feast when breaking fast later.

On the allegations that led to the campaign, Siti said she dealt with the police on a regular basis and most of the time, they would reject her offer of even a drink.

"Based on my experience, surely they were aware whose house they were inspecting.

"Tak kan lah nak sapu benda dalam rumah tu! (It is unlikely they would take anything from that house!). More so knowing that they are under the spotlight," she said.

Read Also
Mystery of the missing chocolates: CCID chief says will investigate if report is lodged 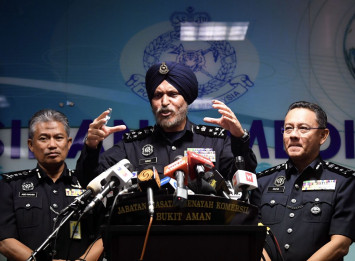 On a lighter note, Siti said that based on the good response, the campaign would most likely be carried out every year.

Chocolate donor Monice Chong said she was ecstatic when she first heard about the campaign.

"I read about it on Facebook. So, I decided to chip in to show my deep appreciation to those who have safeguarded our country.

"As a pensioner, I couldn't give much. As this is the fasting month, I am sure their children would be very happy to receive these chocolates," she said.