JAKARTA - Fed up with being choked by polluted air in Jakarta, 57 people have joined forces to sue the government over poor air quality in the capital.

Grouped under the Capital Advocacy Team and represented by the Jakarta Legal Aid Institute (LBH Jakarta), the residents are set to file a citizen lawsuit against the government to the Central Jakarta District Court.

LBH Jakarta attorney Ayu Eza Tiara said the lawsuit would be addressed to the President, the Environment and Forestry minister and the governors of Jakarta, Banten and West Java provinces. They plan to submit the lawsuit on June 18.

"Of the 57 plaintiff candidates, 20 are environmentalists who were already involved when the (citizen lawsuit) was planned and 37 are civilians of various backgrounds," Ms Ayu said on Sunday (June 2).

The 37 people include students, teachers, employees of private companies, businesspeople, lawyers, researchers, civil servants, app-based motorcycle taxi drivers and senior citizens. All of them registered themselves to the complaint centre set up for a month in April by LBH Jakarta to prepare the lawsuit. 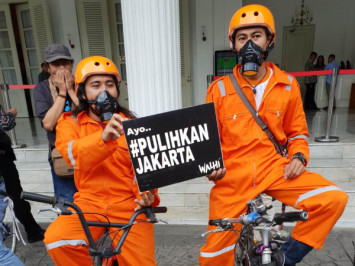 Through the team, Ms Ayu added, they would like to push the government to take action to address air pollution by creating stricter policies that have a significant impact on reducing air pollution in the capital.

Greenpeace Indonesia climate and energy campaigner Bondan Andriyanu said the government had been using the 1999 regulation on air pollution in issuing policies related to the matter.

"It was issued 20 years ago. It has to be updated with new stipulations as air pollution has gotten worse," he said.

He referred to dangerous small particles called PM2.5 that are found above the World Health Organisation's safe limit of 10 micrograms per cubic metre as an example.

Mr Bondan said that in Jakarta, PM2.5 could reach 34.5 micrograms per cubic metre and it could pose a health threat, especially to children.

With its micro size, PM2.5 can pass through the respiratory system and get into the blood, which could cause various illnesses such as acute respiratory infections and affect any organ.

The health threats are the main concern of Mr Ramli Laukaban, a resident of South Tangerang whose child suffers from sinusitis.

He joined the advocacy team to fight for better air quality for the interest of children in the city.

"My child experiences sinusitis only when we are in (Greater) Jakarta. When we go abroad where the air is cleaner, everything is fine," he said.

Curious with air quality in the city, he bought several PM2.5 detectors and installed them in his house.

"I found out that at one time during the night, the concentration of PM2.5 in my house could reach 300 micrograms per cubic metre," he explained.

According to the data he collected from his personal detectors, he began to notice fluctuations of PM2.5 concentration throughout the day.

He recalled that PM2.5 is at its highest concentration at night until dawn and reaches its lowest point in, surprisingly, the afternoon.

"If the government said that pollution is mainly caused by transportation, I don't think the data supports that. There must be something greater than the emissions of cars and motorcycles," he added.

According to Greenpeace, aside from the millions of vehicles in the city, poor air quality was also caused by the coal-fired power plants located in neighbouring areas. The emissions from power plants are reported to contribute 33 to 36 per cent of air pollution. 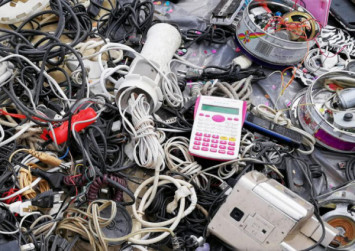 Another plaintiff candidate is videomaker and biker Andito Hari Nugroho. As someone who rides his two-wheeler when commuting, Mr Dito said the morning was the most difficult time to ride, as he had to compete with other vehicles.

He usually rides his bike from his house in Pondok Bambu, East Jakarta, to meet his clients in Central or South Jakarta.

"I always tell clients to meet after 10am or 11am. I usually run out of breath if I ride my bike earlier than that. I can't imagine the amount of carbon and other bad particles I inhale," he said.

Another plaintiff candidate is Ms Nur Hidayati, the director of the non-governmental organisation Indonesian Forum for the Environment. She cited Article 28H of the 1945 Constitution about the right to live in a healthy environment.

"I speak on behalf of not only my organisation but as a resident who has no choice but to breathe polluted air. To breathe clean air is our right that the government has to fulfil," she said.