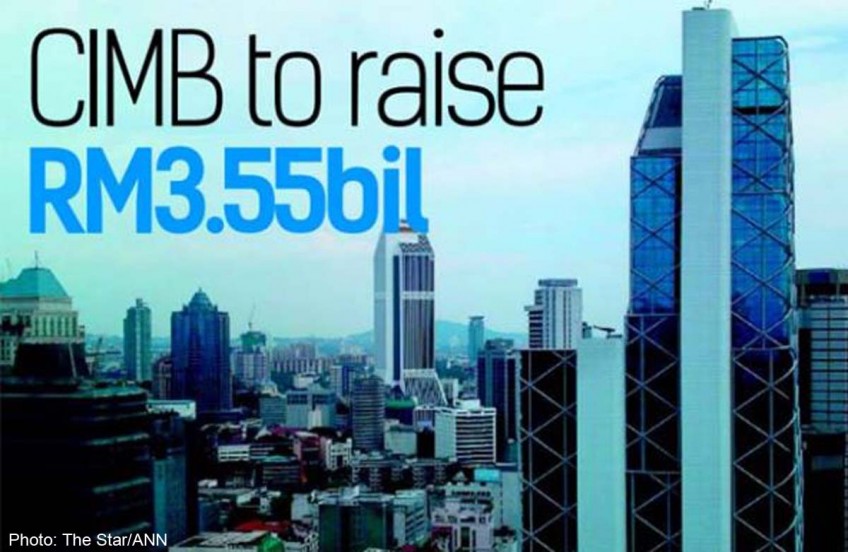 PETALING JAYA- CIMB Group Holdings Bhd will raise RM3.55billion (S$1.38 billion) cash from a share sale exercise, as it kicks off 2014 with an offering that is set to be one of the biggest this year. The private placement exercise was "well oversubscribed" by local and foreign investors.

The country's second largest lender by assets said yesterday it was issuing 500 million new shares at RM7.10 each to strengthen its capital position. This equals to 6.08 per cent of its enlarged share capital.

"We are gratified by the strong support shown by investors at home and across the globe, enabling the deal to be priced at a tight discount to latest market prices," group chief executive Datuk Seri Nazir Razak said in a statement.

"It is a great endorsement for our franchise and growth strategy," he added.

Shares in CIMB were suspended yesterday at RM7.30 and the stock will resume trade tomorrow.

The new equity was placed to domestic and foreign investors yesterday. CIMB said as the offer was well oversubscribed, it enabled the bank to increase the deal size by 25 per cent from its initial target of 400 million to 500 million shares.

Nazir said the bank had to raise such a substantial amount of common equity tier 1 (CET1) to bolster its capital position following the sharp depreciation of the rupiah last year that had set back its capital accumulation plan.

"We have acted decisively to reposition our capital for growth,'' he said.

The accelerated book-building and private placement exercise would lift the group's CET1 from 8.2 per cent to 9.7 per cent. The new shares will be issued on Jan 22 and listed a day after that.

"With the new capital, we stand strong to face any future volatility in financial markets and can continue to grow our business at our desired pace going forward."

Alliance Research banking analyst Cheah King Yoong said pending further details by the group on the specific usage of the capital, he was maintaining a "neutral" recommendation for the group with an unchanged target price at RM7.21.

Shares in CIMB have fallen 4 per cent since the start of 2014, faster than the FTSE Bursa Malaysia KL Composite Index's 1.7 per cent decline over the same two-week period.

Bloomberg data showed 15 analysts have "hold" recommendations on CIMB, while seven have "buy" calls on the stock and four "sell" calls.

Last August Nazir said the group would "revisit the Philippines", after plans to buy 60 per cent of the country's Bank of Commerce from San Miguel and its other shareholders fell through two months earlier.

A year before that, CIMB purchased some of Royal Bank of Scotland's assets in the Asia-Pacific region for RM849.4mil, paving the way for it to bolster its overseas earnings.

CIMB has already built up a significant presence in Indonesia via PT Bank Niaga, which contributed about a third of the group's pre-tax profit in the first nine months of 2013.