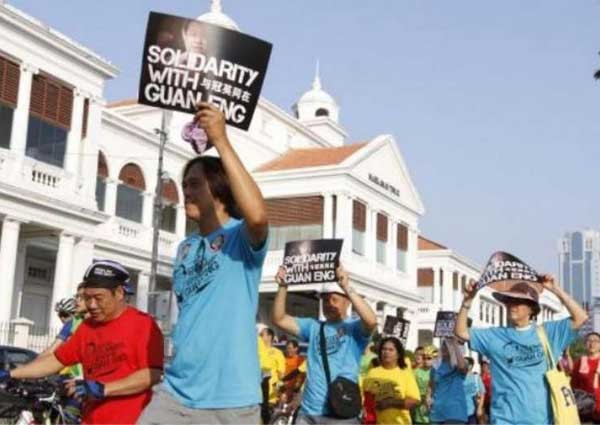 They gathered at 7am at the Union Street and began marching with Lim, who leads the opposition Democratic Action Party (DAP) his father, veteran opposition leader Lim Kit Siang, in the 2km walk towards the Esplanade.

The embattled Lim pleaded not guilty to two graft-related charges on Thursday (June 30) in a case that has jolted the country.

He claimed trial to the charges related to his purchase of a bungalow at below-market-prices last year and improper change of state land use at the Penang High Court and was released on RM1 million (S$335,300) bail.

He faces up to 20 year in jail if convicted under Section 23 of the Anti-Corruption Act and Section 165 of the Penal Code.

The march on Sunday ended at 8.45am after Guan Eng addressed the crowd.

Among those present at the event were DAP MPs, assemblymen and members of the Pakatan Harapan opposition alliance.

They include Bukit Mertajam MP Steven Sim and Bagan Dalam assemblyman A. Thanasekharan.