Complaints over 'health drink' lead to raid in Penang

GEORGE TOWN - Multiple complaints over a women's health drink led to a raid, where over RM1,500 (S$489.60) worth of products were confiscated by the state Domestic Trade and Consumer Affairs Ministry (KPDNHEP).

"The owners of the company suspected that all the victims had purchased counterfeit products and reported it to us.

"Based on the information, we then sent a team of nine officers and representatives to the shop located in the Bukit Jambul area at 2pm on Tuesday (Dec 10).

"During the raid, we seized 57 bottles of counterfeit health beverages worth RM1,596.

"We found that the artificial beverage was priced at RM18 a bottle, compared with the original that is priced at RM32," he said during a press conference held at the KPDNHEP office along Lebuh Downing on Wednesday (Dec 11).

Chin said the owner of the shop, who had been operating for over a year, claimed that they were not aware that the products they sold were counterfeit.

"We will also work together with the Health Ministry and send a sample of the product to the Department of Chemistry Malaysia to analyse the contents of the product. 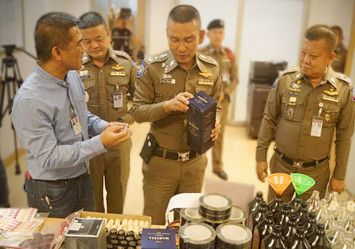 "Further investigations will be conducted under Section 8(2)(b) of the Trade Descriptions Act 2011 for supplying goods where a false trade description is being used.

"Under the Act, owners of the premises could face a fine of not more than RM10,000 for each fake item, or three years in jail or both upon conviction for first-time offenders," he said.

Chin said consumers are advised to be careful when agents or wholesalers offer products at a bargain because counterfeit products usually look similar to the original.

"With these confiscated products, we have noticed some significant differences with the original products, such as odour, its concentration and even the colour of the packaging, which is slightly faded.

"Additionally, users can also identify whether some products are genuine or imitated by using the QR Code scan method that some companies offer," he said.