A photograph of the security camera footage being screened.

GEORGE TOWN - The contractors who dumped construction debris into the sea from an open air parking lot in Lebuh Farquhar here on April 19 were nabbed within four hours, after a security camera caught their lorry's licence plate number.

A source in the Environment Department (DOE) revealed that a security camera was active at the entrance to the parking lot, and the lorry's licence plate number could be clearly read in the video footage.

After that, it was a simple matter of tracing the lorry owner and finding out where they were doing renovations.

"We caught them within four hours of watching the video. They were illegally renovating a house nearby," said the DOE source.

He said in renovation projects with permits, the contractors had to place a roll-on-roll-off bin on site to collect all construction debris for proper disposal.

On April 19, a member of the public recorded two men on video dumping their waste in broad daylight. 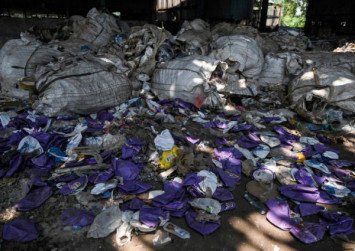 The video, which went viral and angered viewers, showed the pair parking their lorry by the seaside and emptying bucket after bucket of construction debris into the sea within George Town's Unesco World Heritage Site.

"We are going to take them to court," the DOE source assured.

The source revealed this after state Local Government Committee chairman Jagdeep Singh Deo said at the state assembly meeting on Monday (April 29) that the illegal dumping case had been referred to DOE.

H'ng wanted an update on how authorities were handling the case and hoped for stern action.

"There are too many people dumping waste illegally in Penang, including in my constituency.

"We need to take firm action by taking them to court. Fine them RM10,000 or RM50,000 and let people know Penang is serious about fighting illegal dumping," H'ng said.