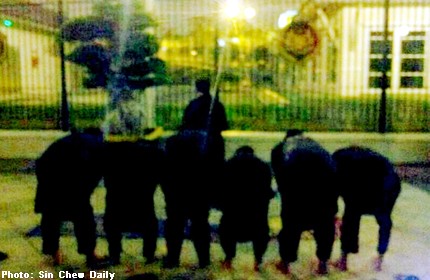 CULT MEMBERS: Seven members of the group praying in front of the palace.

In a bizzare attempt to claim Malaysia's throne, 10 people tried to enter the king's palace in Jalan Duta, Kuala Lumpur.

They were armed with nothing more than flags and self-produced documents declaring their leader as the "true heir" to the throne.

The group, all members of a cult, gathered in front of the main entrance of the palace at about 4.10am on Monday.

He told The Star: "We arrested eight men and two women clad in black. They were taken to the Travers police station and remanded to assist in investigations," he said.

He said investigations revealed that the group came to the palace to "replace" the current Malaysian king as they claimed that their leader was the true heir to the throne.

"We also seized three cars. There were no weapons in the vehicles, only 13 flags and advice of authorisation documents," Mr Ku said in a text message.

The original Merongmahawangsa, a descendant of Alexander the Great, is said to be the first king of the ancient Langkasuka kingdom, the precursor to the Kedah sultanate, the oldest sultanate in the country.

The self-proclaimed "rightful Yang di-Pertuan Agong", in one of his documents, also called for the formation of a three-million strong army of people aged between 16 and 30 to "set the stage for the return of AlMahdi".

Imam Mahdi is the prophesied Muslim leader who will come just before the end of the world.

The self-proclaimed "king", his "queen" and "princess" were among those arrested.

Mr Ku said investigations revealed that the 40-year-old man claiming to be the "rightful Yang di-Pertuan Agong" is the leader of the cult.

He said: "The two women who were arrested with the group are the 'leader's' 52-year-old wife and 11-year-old daughter. We have remanded all of them to help with further investigations."

He said the case was being investigated under Section 121B of the Penal Code for intending to depose the king and Section 9(5) of the Peaceful Assembly Act 2012 for failing to give notice of assembly to the police.

Sources said that three of the eight men in the group did not have legitimate documents.

Palace guards said they had not received any special orders following the incident.

Meanwhile, things were back to normal at the palace with tourists gathering there and taking photographs.