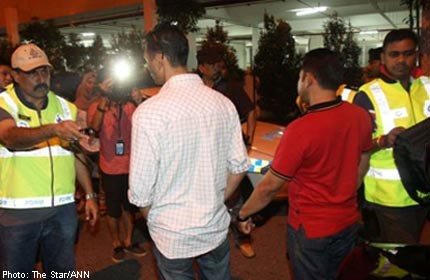 KUALA LUMPUR - Police - armed with the Crime Prevention Act to detain suspects - have begun a major crackdown against gangsters and criminals.

Ops Cantas (Cut-Off) is under way in Ampang and will be expanded to cover other districts in the Klang Valley before going nationwide.

Fifteen suspects have already been picked up under the operation, with 49 police personnel from Ampang Jaya and four from Bukit Aman manning roadblocks in various areas.

The operation follows a directive from Inspector-General of Police Tan Sri Khalid Abu Bakar for police districts to step up anti-crime activities due to the recent spate of shootings and robberies.

Ampang Jaya OCPD Asst Comm Amiruddin Jamaluddin said the operation would be held daily from midnight to 5am to deter crime and "make the people feel safe".

"We were briefed by the IGP on Friday night on the crackdown. Police will use Section 3 of the Crime Prevention Act to detain and interrogate suspects," he told The Star yesterday.

ACP Amiruddin said under the Act, police could detain suspects for up to 14 days without trial with the option of extending the detention for another 14 days.

"We also have a crime prevention unit looking out for suspicious characters," he added.

The man is wanted in four other cases.

He said police detained two men with walkie-talkies, gloves, a knife, 0.48gm of syabu and 0.97gm of Erimin 5, and tools believed to be used for burglaries in Taman Mela­wati.

"We detained another man near Kampung Baru Cina Ampang and recovered a motorcycle which was reported stolen in Kajang recently," he added.

ACP Amiruddin said police would continue with the operation until there was a reduction in crimes.