This comes after Deputy Inspector-General of Police Tan Sri Noor Rashid Ibrahim confirmed on Thursday (July 19) that Najib had been summoned by the police again to give a statement, reported Bernama.

He said the statement from Najib was necessary for the police to complete its investigation into the scandal-plagued 1Malaysia Development Berhad (1MDB).

Read Also
Najib's bank account unfrozen as it is unrelated to SRC and 1MDB investigations: MACC 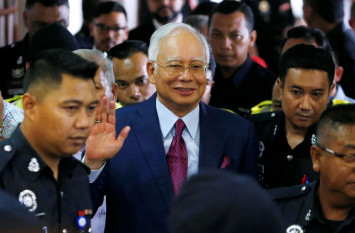 Najib was charged with three counts of criminal breach of trust and one count of using his position for gratification earlier this month.

The charges are in connection with how RM42 million (S$14.1 million) went from SRC International, a former 1MDB subsidiary, into Najib's personal bank account.

Up to RM1.1bil worth of cash, jewellery, luxury handbags and watches, as well as sunglasses have been seized from residences and offices linked to Najib, making it the biggest seizure in Malaysian history.

A total of RM116 million in cash in 26 different denominations were also seized.