PUTRAJAYA - A total of 8,000 Covid-19 patients have recovered so far in Malaysia since the outbreak began in January.

Health director-general Noor Hisham Abdullah said this translated to a 93.8 per cent recovery rate out of the total 8,529 infections recorded in the country.

The country on Thursday (June 18) discharged another 127 patients and saw an additional 14 new cases.

"Currently, the total number of active cases is 408. All (patients) have been isolated and are being treated," said Datuk Dr Noor Hisham in a statement.

The last time Malaysia had a lower number of active cases was on March 15 (389 cases), which was a few days before movement curbs known as the movement control order (MCO) was implemented.

There was no death reported for the fourth day in a row, keeping the number at 121.

Of the 14 new cases, 11 of them are locally transmitted while the remaining three are imported cases.

Dr Noor Hisham said the seven cases were found in Kuala Lumpur (two cases), Sarawak (two), Selangor (one), Sabah (one) and Perak (one).

The cases were detected through close contacts of positive cases, as well as via health screenings.

There are four Malaysians who were infected locally, including two staff members based at the Bukit Jalil Immigration Depot.

Another two were reported in Sarawak, including one detected from pre-operation screening conducted at the Sarawak General Hospital in Kuching.

The other Sarawak case is of an individual who was tested before flying overseas for an important matter.

Currently, there are four patients being treated at intensive care units (ICU) with none on ventilator support.

The ministry, said Dr Noor Hisham, had tested a total of 13,149 individuals at immigration depots nationwide, following the discovery of Covid-19 cases among detainees. 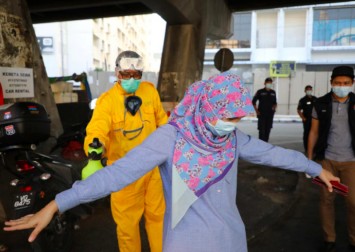 A total of 782 cases have been discovered from the screening exercises, of which seven cases involve Malaysians.

The positive cases were so far found at depots located in Kuala Lumpur/Putrajaya (651 cases), Selangor (126), Sabah (three) and Melaka (two).

"Once we have identified Covid-19 positive cases, they will be admitted to hospitals for treatment, and active case detection will be conducted," said Dr Noor Hisham.

As part of the ministry's targeted approach to Covid-19, he said all new detainees at the depots must be tested first.

Those who are about to be transferred to other detention centres or deported back to their countries must also be tested.

Staff at the depots were also required to be tested, he added.